Sligo Rovers and St Patrick's Athletic had nights to remember as they both secured their place into the third qualifying round for the UEFA Conference League.

The Bit O'Red stunned Scottish side Motherwell at the Showgrounds while St Pats progressed against Mura of Slovenia thanks to Joe Anang's penalty shoot-out heroics.

It turned out to be a historic night for Irish football, so we looked back at some of the other great achievements by Irish clubs in Europe.

Nearly fifty years ago, Athlone Town drew with one of the most iconic clubs in world football at St Mel's Park.

It was an AC Milan team that featured a host of Italian internationals at the time in front of a packed house of 10,000 in St Mel's.

The night could have been so much more for the Town had John Minnock's penalty not been saved by Enrico Albertosi, a man who played over 30 times for Italy.

Athlone travelled to the San Siro for the second-leg with the tie firmly in the balance but the seven-time European Cup winners scored three late goals to break the hearts of Athlone.

As nearly half a century has passed, the legend of that Athlone team remains rooted in Irish football history.

Alan O'Neill in the UCD goal produced the game of his life to keep a clean sheet against Howard Kendall's side.

It remains one of the finest Everton teams of all-time and over the two legs they could only manage just one goal against a stubborn UCD defence.

UCD frustrated Everton so much at Goodison Park that the home side was booed off the pitch.

The Toffees later went on that season to win the First Division title and the European Cup Winners' Cup in what was the club's glory days.

In front of over 4,000, Cork took the lead in the first-half thanks to a Dave Barry strike and the upset was on the cards.

Bayern Munich were level on the day after Germany international Stefan Effenberg found the net just before half-time.

Cork managed to hold on in the second-half for a famous result and they travelled to Olympiastadion in Munich for the second-leg. The Germany side eventually got over the line and progressed over Cork.

It was a famous night in Tolka Park as Shels' 2-0 victory over the Croatian side saw them through to the third qualifying round of the Champions League.

It was a Shelbourne's side that featured Irish internationals Jason Byrne, Wes Hoolahan and League of Ireland legend Joseph Ndo.

Dave Rogers found the all important first goal on the night while Alan Moore's injury time goal put the icing on the cake on a historic night in Drumcondra.

Shelbourne's run ended at the following hurdle, losing to the previous year's Champions League semi-finalists Deportivo La Coruña over two legs. 25,000 fans watched Shelbourne draw with the Spanish side in the first leg at Lansdowne Road before losing the second leg convincingly.

Stephen Kenny was just 34 when his Derry side beat Swedish club Gothenburg.

Seán Hargan was the match-winner just ten minutes from time in Ullevi a win Kenny regularly says his one of his favourties.

The large Derry faithful enjoyed themselves in Sweden and they would have enjoyed what they saw in the second-leg as the Candystripes secured another 1-0 victory to set-up a tie with Scottish side Gretna.

Derry went on to beat Gretna 7-3 on aggregate, meaning they would go on to met Paris Saint-Germain in the next round.

PSG were held scoreless in the first-leg at The Brandywell but lost out in the second-leg 2-0 infront of 5,000 Derry fans in the French capital.

Rovers became the first Irish men's side to reach the group stages of a European competition when they came from behind to beat the Serbian side.

The former Northern Ireland manager Michael O'Neill guided his side to the Europa League thanks to a 3-2 aggregate win.

Shamrock Rovers travelled to Belgrade off the back of a 1-1 draw in the first-leg and the had it all to do when Vladimir Volkov found the net for the home side in the opening half.

It was Rovers' right-back Pat Sullivan who got them back into the game with a strike from outside the area just after half-time.

With the scores level, the Hoops found a winner through Stephen O'Donnell's spot-kick in extra-time to send the travelling Rovers' contingent into a frenzy.

Who could forget Stephen Kenny's Dundalk side European run in 2016?

David McMillan hit a brace and Robbie Benson scored in injury time to comfortably sent Dundalk into the next qualifying round.

The Dundalk faithful had to make the trip down the M1 to Tallaght Stadium and their support was rewarded with a sensational victory.

The Lilywhites's run saw them reach the Europa League group stage for the first time, it was in the midst of a golden era for the Louth side which saw them win four titles in five years.

Ireland was starting to come out of the pandemic and for Bohs fans the trip across the city to the Aviva Stadium last summer was a regular one.

The Gypsies were on a brilliant European run and the peak of it was their 2-1 win over Greek side PAOK at the Aviva.

It was a Bohs side that include the likes of youthful trio Dawson Devoy, Andy Lyons and Ross Tierney, who have all since left the Phibsborough club.

Bohs' European run was over when PAOK won the second-leg 2-0 but the lucky Bohs fans that were there will never forget the night in the Aviva they beat PAOK. 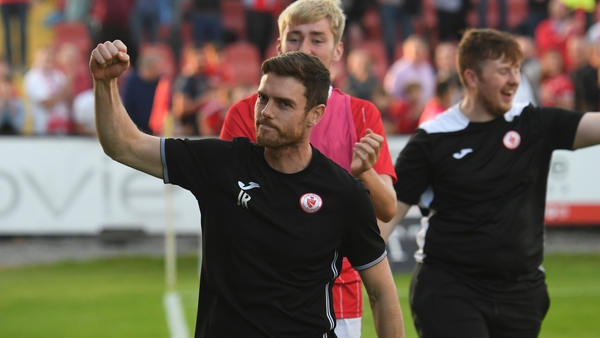