Aidan Keena's 27th minute winner will go down as one of the most famous goals in the club’s history after Sligo Rovers beat Motherwell in their Europa Conference League second round qualifier first-leg tie at Fir Park.

Under pressure for portions of the tie, the Bit O’Red looked a match for the Scottish side throughout and created enough opportunities to extend their advantage ahead of next week’s second leg at the Showgrounds.

On the back of consecutive defeats to both Bala Town and UCD, Rovers boss John Russell made three changes from that loss to the Students. Adam McDonnell and Karl O’Sullivan returning to the midfield, while Sligo were boosted by the return of experienced Garry Buckley to their defensive line.

Motherwell boss Graham Alexander included recent arrivals Blair Spittal, Paul McGinn and Josh Morris who were all involved from the off.

The visitors ended this half on the back foot, but did create the best of the chances early on, on the recently laid Fir Park surface.

O’Sullivan’s cross to the front post was almost turned home by Will Fitzgerald, but the former Derry City winger couldn’t connect properly with O’Sullivan’s driven ball after just 34 seconds.

Buckley and Shane Blaney involved before the ball fell to Lewis Banks who almost forced the former’s cross past Motherwell goalkeeper Liam Kelly, only for the net minder to react in time to claim Banks’ shot.

Sligo lost regular goalkeeper Ed McGinty to League One outfit Oxford United on Wednesday. His replacement Luke McNicholas looked in no way fazed by the occasion when he denied early efforts at goal from the home side. 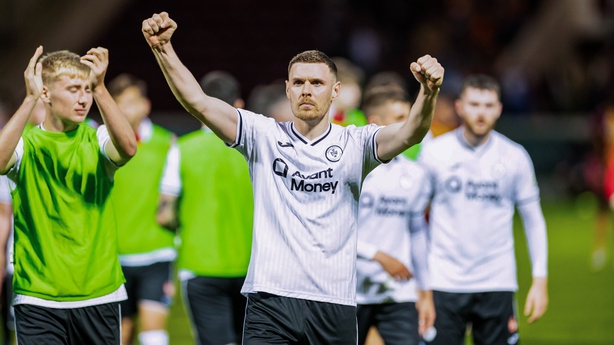 Although the Mayo man did have a moment of worry when he came to meet Morris’ corner in the 16th minute. A mix-up between McNicholas and Banks allowed the ball to fall to Motherwell’s Barry Maguire who made a mess of the follow up, firing well wide.

A slip up from Rovers full back Paddy Kirk allowed the Scots in again on 22.

The Dubliner’s weak back-pass was chased down by the Steelmen attack allowing opportunities for both former St Pat’s man Jake Carroll and winger Spittal, with McNicholas denying Carroll’s shot from the angle.

Sligo then silenced the large home support on 27 minutes.

Bevis Mugabi failed to control a diagonal ball from the right, allowing Keena to steal in and lob the oncoming Kelly, much to the delight of the sizeable travelling support of 500 or so.

As expected, Rovers had to deal with a lot of pressure for the remainder of the half.

Maguire again testing McNicholas who went full stretch to deny the 24-year-old, while both Maguire and Conor Shields had chances before the interval.

McNicholas was called upon to put a stop to Kevin Van Veen's run four minutes into the second half after the striker had wriggled his way past Buckley.

There was a swerving set piece from Morris which McNicholas shifted his body weight in time to control the play just short of the hour. Fitzgerald then saw his looping header from an O’Sullivan cross land on the top of Kelly’s net shortly after, much to the disapproval of a now vexed home following.

Motherwell substitute and former Bohemians winger Ross Tierney went close for the Lanarkshire men on 70 minutes, but could only find the side netting after sloppy play from Sligo saw them concede possession in the middle.

Callum Slattery had McNicholas on his toes as the former Cliftonville loanee got down to push away Slattery’s 25-yarder.

Substitute Max Mata should have had Rovers’ second 13 minutes from time.

The New Zealander ran on to Keena’s perfectly timed ball over the top only for Mata to fluff his lines at the vital moment, as Kelly along with two Motherwell defenders did enough to put him off.

Russell’s charges looked like they had genuine claims for a penalty turned away by the Faroese referee on 84 minutes, when Carroll raised his arm in front of goal to keep out Mata’s header at the back post.