Daniel Kelly earned Dundalk a point, but should have delivered all three, as the sides shared the spoils in a rip-roaring tussle at Richmond Park.

Eoin Doyle gave St Patrick’s a first-half lead with winger Kelly levelling late on before then missing a golden chance to win it.

It remained a breathless encounter to the end with Dundalk head coach Stephen O’Donnell sent from the dugout for dissent in stoppage time as his side now sit nine points behind leaders Shamrock Rovers.

In one change from their win over Drogheda United last time out, St Pat's gave a debut to new signing Harry Brockbank at right-back.

Dundalk made no fewer than four changes from the side that lost the Louth derby at Drogheda last week.

Peter Cherrie made his first appearance of the season in goal for the injured Nathan Shepperd while Sam Bone, Keith Ward and skipper Patrick Hoban also came in.

Showing more composure initially, Dundalk raided promisingly early on, Kelly flashing over a dangerous cross that had just too much pace on it for Hoban to reach.

A corner, whipped to the back post by Ben McCormack, registered St Pat’s first threat on 13 minutes as skipper Joe Redmond’s firm header was straight into the hands of Cherrie.

Three minutes later the home side took the lead following their first incisive move of the game down the right. 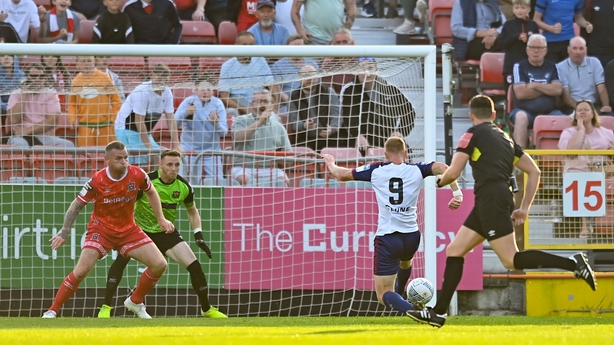 Eoin Doyle released Billy King whose cross was teed up cleverly by Mark Doyle for his namesake arriving into the box.

The striker took a couple of touches before mishitting his shot which deflected into the net off Andy Boyle for what looked like an own goal, though Doyle happily claimed it as his 10th league strike of the season.

That really sparked an already intriguing game to life with Dundalk getting their first shot on target on 20 minutes.

Lewis Macari did well up from right-back to pick out Robbie Benson whose drive was tipped over his crossbar by Joseph Anang.

Ward then wasted a real opportunity when slicing his shot tamely off target having been found in space.

Hoban should also have done better than glance a header wide from a terrific delivery by Macari 10 minutes before half-time.

Dundalk worked hard as they chased the game from the restart. St Pat’s kept their shape and defended stoutly, Redmond making a fine block minute in to frustrate Hoban.

As the half progressed, it was St Pat’s who looked the more likely to add to their lead as they continually stretched Dundalk on the counter.

Adam O’Reilly, with a fine diagonal ball, and Anto Breslin combined well to set up Chris Forrester who brought a diving save from Cherrie with a drive from distance.

The home side were then incensed at not being awarded a 66th minute penalty.

New signing Serge Atakayi, on as a substitute just a few minutes earlier, certainly appeared to have been hauled down by Boyle after scampering past the Dundalk defender. Referee Rob Hennessy wasn’t convinced.

Lively winger Atakayi then sent fellow substitute Tunde Owolabi in down the right on 75 minutes. Cherrie narrowed the angle well to deflect the striker’s shot onto a post and out for a corner.

It proved crucial as Dundalk equalised on 77 minutes.

Hoban found Kelly who cut in from the left to shoot, the ball deflecting off the retreating Brockbank to the net. 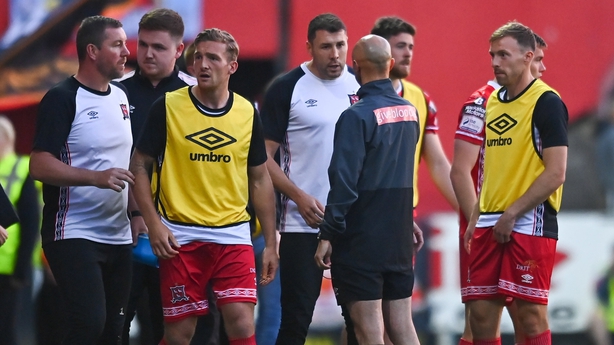 St Pat’s finished on the front foot, Mark Doyle planting a header from a Forrester corner against the crossbar.

But Kelly should have won a rollercoaster game for Dundalk five minutes from time only to head tamely wide from Leahy’s superb cross, rightly holding his head in his hands at the miss.