Denmark beat Finland 1-0 in their Euro 2022 Group B match at Stadium MK to keep alive their hopes of reaching the quarter-finals.

Captain Pernille Harder, the Chelsea forward, nodded in from close range with 18 minutes left after the ball had bounced back down off the crossbar.

Both sides had lost their opening games, the Danes thrashed 4-0 by an impressive Germany, while Finland were well beaten by Spain, so the pressure was on for a positive result.

Denmark created an early chance when Nadia Nadim stabbed the ball goalwards, but Finland goalkeeper Tinja-Riikka Korpela scrambled across to save off the line.

As the half-hour mark passed, Harder got clear into the area, but a heavy touch from the Chelsea forward saw the ball run through to the keeper before Korpela pulled off another decent stop from Katrine Veje.

Finland eventually threatened shortly before half-time when Liverpool midfielder Emma Koivisto tried her luck with a curling effort which fell just off target.

Denmark started the second half brightly, with Nadim shooting wide after being picked out by Harder following a run down the right flank. 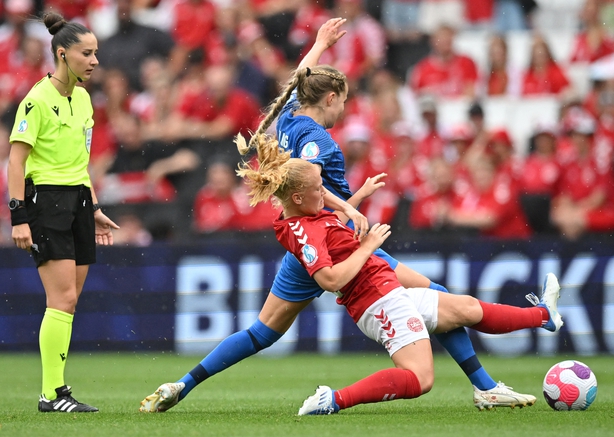 At the other end, Danish keeper Lene Christensen was finally called into action when she stopped a long-range effort from Finland midfielder Ria Oling.

Denmark eventually made the breakthrough with 18 minutes left when Karen Holmgaard sent a header on to the crossbar and Harder was alert to nod home the rebound.

There was a brief stoppage during the closing stages when Harder needed some treatment following a clash of heads with Finland midfielder Koivisto, but both players were soon able to resume.

In stoppage time, Christensen produced an acrobatic one-handed save to push over a 20-yard strike from substitute Jenny Danielsson which looked set for the top corner.

Denmark meet Spain in their final group match at Brentford on Saturday looking to continue momentum into the last eight - and a possible showdown with hosts England.