England coach Sarina Wiegman was at pains to try and keep her team's feet on the ground following their record 8-0 thrashing of Norway in Group A, saying it was just one game in their quest to win a first major title at the Women's Euros.

The win at Brighton's Amex Stadium came through a relentless performance from the hosts, who went 6-0 up in the first half thanks to a penalty from Georgia Stanway followed by goals from Lauren Hemp and two each by Ellen White and Beth Mead.

Alessia Russo added another after halftime before Mead completed her hat-trick to make it a record European Championship win for the Lionesses, widely regarded as one of the favourites to lift the trophy on 31 July.

"It was a very special night. We didn't expect to make such a big win but we played really well," Wiegman told the BBC after her team secured a place in the quarter-finals.

"We really exploited their weaknesses and we’re really happy, but at the same time it’s just one game. We’ll enjoy the moment but we’ll stay really grounded.

"'What’s going on here?' That was going through my mind. Norway didn’t have the answers. We created chances, scored goals and it was very enjoyable to watch.

Norway, playing their first major tournament in five years with key forward Ada Hegerberg in the lineup, were woeful in defence and struggled to give any justification for their status as dark horses in the tournament.

"Norway didn't have the best game today. We're really happy with the performance. We showed how good we are. When we go through (from the group stage) we’ll get tested at a higher level. We need to do better every game," Wiegman added.

"We really showed our qualities. The fans have been really nice again, almost 30,000 of them. We just need to enjoy that moment, relax a little bit then start preparing for the next game."

In the last eight England will take on either Germany or Spain, who meet on Tuesday after both teams recorded emphatic wins in their opening games. 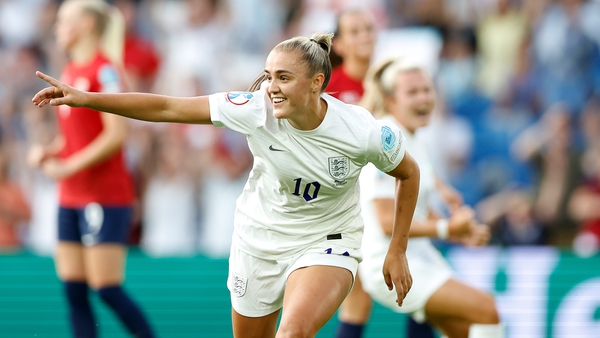