Shamrock Rovers have confirmed the departure of Danny Mandroiu to Lincoln City.

The club confirmed the news on Twitter, writing: "We can today confirm the transfer of Danny Mandroiu to @LincolnCity_FC

"We would like to thank Danny for his contribution to Shamrock Rovers over the past 18 months and we wish him all the very best in his future career."

Rovers manager Stephen Bradley had as much as confirmed the news earlier in the week, saying, "Danny has been brilliant for us and I don't want to see him go but he’s up at the end of the year. Sometimes it's just unfortunate that sometimes contracts do run down. Both parties have tried over the last while to get him to stay.

"We’ve been really good and the club has been good at transfers over the last five years, protecting ourselves with long contracts and understanding where we are in the food chain in terms of selling players."

On a busy day for the Tallaght club, Republic of Ireland Under-18s international Dara McGuinness completed his move from Rovers to Stoke City.

McGuinness will go straight into the Potters' Under-21s team, who will compete in Premier League 2 Division Two this season.

The Mullingar-born 18-year-old striker has been at the Hoops for the past three seasons, featuring for the Shamrock Rovers II side that competed in the in the SSE Airtricity League First Division as well as the club's Under 17s and Under 19s.

"Dara has been unbelievable since coming to the club in 2020," said Shamrock Rovers academy director Shane Robinson.

"His appetite for hard work and his dedication to train and constantly improve has been brilliant to watch. We wish him every success on his move to Stoke and hope to see him continue his development."

Elsewhere, Irish international Tyler Toland has completed a move to Levante in Spain.

The Donegal woman has signed a two-year deal arriving from Celtic, with whom she won a League and League Cup medal last season.

Levante were sixth in the Primera Division last season. 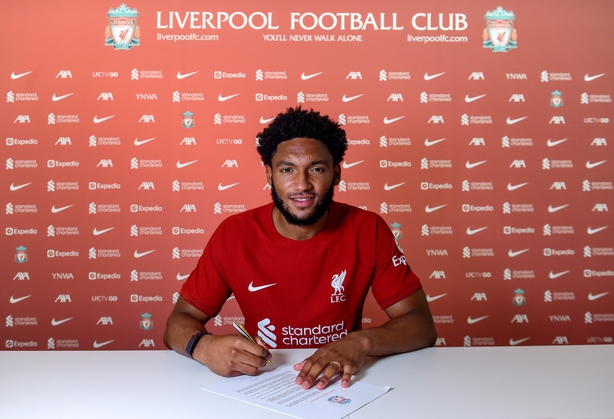 Liverpool defender Joe Gomez has signed a new five-year contract with the club.

There has been speculation about the 25-year-old's future over the last few months, having dropped down the pecking order at Anfield.

However, the club have invested a lot of faith in the player, who has suffered serious knee and ankle injuries since joining in 2015, and his new deal is a reflection of that.

"Obviously, I have been here quite a while now, but in the grand scheme of things I still feel young and, like you say, the best years are ahead of me. I have got more to learn and the time to do that," he told liverpoolfc.com.

"I think I have the platform here to do it with the manager and the coaching staff around me and my team-mates, to make sure the best years are ahead."