Dundalk found their shooting boots in the second half as goals from former Students David McMillan and Keith Ward either side of an Evan Caffrey own goal ensured victory over UCD at Oriel Park.

Stephen O'Donnell’s side struggled to turn possession into chances in the opening half as the visitors, who were under the guidance of Ger Barron with manager Andy Myler suspended, set up to frustrate.

A half-time tactical switch in having Daniel Kelly and Joe Adams swap wings paid dividends for the home side though as they both played a role in McMillan’s 51st minute opener.

The Lilywhites never looked back after that to ensure they remain in second place in the table ahead of the first of their two games in hand over league leaders Shamrock Rovers away to neighbours Drogheda United next Friday.

While Dundalk dominated possession from the off, it took until the 31st minute before they registered their first attempt when McMillan got on the end of Adams’ cross but couldn’t direct it goalwards.

Their first effort on target came five minutes later when former Student Paul Doyle let fly from distance on his weaker right foot, but Cian Moore was alert to tip it over the bar.

The 19-year-old goalkeeper was called into action again on 39 minutes when he fingertipped Greg Sloggett’s effort away after he drove into the box, with Michael Gallagher on hand to hook clear the loose ball before Daniel Kelly could pounce. 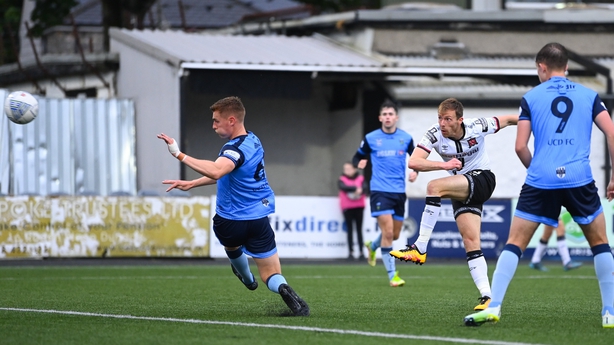 The breakthrough would arrive six minutes after the restart when Kelly broke down the right, with his cross knocked down by the head of Adams to McMillan, who rifled home his first league goal since last July.

Dundalk then doubled their lead on 56 minutes. Mark Connolly headed against the crossbar from Robbie Benson’s corner with the loose ball coming off Caffrey and into his own net, with the ball looking like it had crossed the line before Adams added to it.

Dylan Duffy went close to pulling a goal back with UCD’s first attempt on 69 minutes but his curling left-foot shot flashed just the wrong side of the post.

Sloggett would then go close again moments later when he was picked out by Lewis Macari’s cross from the right, but failed to get the connection on it to divert it goalwards.

Macari then had an effort saved by Moore on 81 minutes, but Dundalk would add a third in stoppage time when Ward finished off a neat cross from fellow substitute John Martin for his eighth goal for Dundalk and the first of his third spell with the club.