Cork City moved back to the top of the SSE Airtricity League First Division after a 1-0 win over Cobh Ramblers.

The Cork derby triumph coupled with Galway United's draw with Treaty United saw Colin Healy's side move one point clear at the top in the race for automatic promotion.

Darragh Crowley scored what proved to be the Cork winner in the 65th minute and they saw out the game after Cobh had Darragh Connell sent off in the closing stages following a second bookable offence. 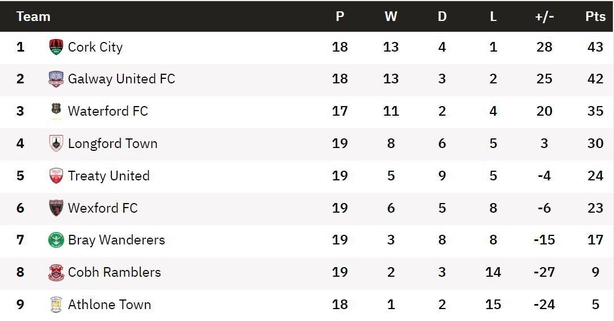 John Caulfield's side are seven points clear of third-placed Waterford FC, who continued their good recent form with a 1-0 over Bray Wanderers at the RSC.

Louis Britton converted from a Roland Idowu cross to earn all three points for the Blues under new manager Danny Searle.

Wexford moved within a point of the top five after Conor Barry's late winner saw them past fourth-placed Longford Town.

Luka Lovic had given Wexford the lead with 20 minutes to go but Karl Chambers levelled for the visitors four minutes later, before Barry's late lasting impression on the fixture.