The Dublin Derby provides a "great opportunity" for Shamrock Rovers to bounce back from their recent defeat to title challengers Dundalk, according to their defender Roberto Lopes.

Rovers face a busy weekend with two Dublin derbies in four days, as they host Bohemians on Friday night before making the trip to Richmond Park on Monday to face St Patrick's Athletic.

"It was a really tight game against Dundalk, they managed to nick a goal and then they showed the strength to see the game out. It's a great opportunity to bounce back with two big games against rivals."

Lopes, who turned 30 last week, has been playing in the league for over a decade and has experienced the Dublin Derby from both sides of the divide.

"Derby day, form goes out the window. It does not matter where teams are, what sort of run they are on. If you are not up for the battle on the day, you can get turned over just as easy and I know that from experiences with both sides.

"Shamrock Rovers versus Bohemians is one of the biggest games on the calendar."

Lopes has been a mainstay in the Rovers’ defence since his controversial move across the city from Bohs in the winter of 2016, he has missed just two of their 20 league games this season.

Bohs come into the game off the back of an important win over Shelbourne, a Dawson Devoy goal from distance gave Keith Long's side a much-needed three points. Lopes says Rovers cannot afford to take their rivals lightly.

"Keith (Long) and Trevor (Crolly) do a fantastic job every year rebuilding the team because they always seem to lose their best players but they find some gems and settle the team again.

"We cannot take our eye off the ball, this is a really good Bohs team and they have got some really good players and we will be ready for them."

Lopes represented his father’s native Cape Verde at the African Cup of Nations earlier this year and the Rovers defender impressed, playing every minute of their three group stages games and winning the Man of the Match award in the 1-1 draw against Cameroon.

"I always dreamed of playing international football, did I think I would be playing for Cape Verde at this stage of my career? No.

"I had fantastic support from both the league and Shamrock Rovers, it was great to see and having that extra backing really motivated me to perform."

A number of the Cape Verde squad, including Lopes, were struck down with food poisoning before their last 16 game with Senegal, leaving Lopes unable to return to the pitch for the second half.

Lopes’ time with Cape Verde has opened him up to new experiences, something that has helped him grow on and off the pitch.

"My experiences in Africa have made be a better person, I had some difficulties off the pitch that we did not foresee going over there and it has made me more level minded.

"I have really enjoyed that not everything is perfect, you are not always going to have the best preparation before matches or that something on the day could go wrong, but you just have to get on with it.

"It is a great help going into any big game now, that no matter what happens you just have to be ready for it and do your job as best you can."

Shamrock Rovers were boosted with the news last week that Gavin Bazunu completed his move to Southampton (below), with the Tallaght side now set for a large financial figure from the sell-on fee. 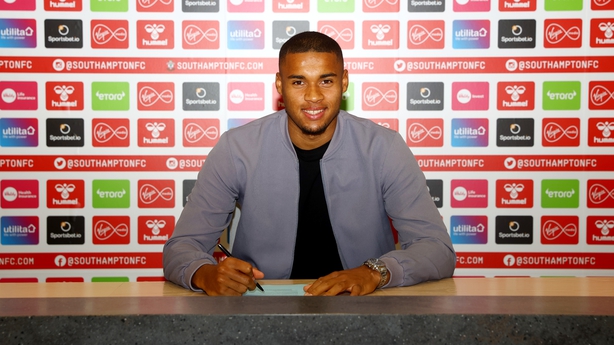 Lopes, a former team-mate of Bazunu, says his progression through the Rovers ranks to the Premier League is a path that is now open for further Irish youngsters.

"I think it is a really big selling product of our league, you can be successful at a League of Ireland club, play senior football and still manage to go across as a relatively young man. You are miles ahead of people in academies.

"People go over to England at 16 and think you have made it but you are actually in an academy for a couple of years and you have to develop and kick on.

"By the time you are 23, you could be back home without ever kicking a ball for the first team, where the likes of Gavin had double figure games under his belt before he went away and he was a man.

"To be training with real high-quality players who have made a living over across the water, it’s a great opportunity for the young players to learn off the players we have here."

The games are coming thick and fast, as the long trip to Ballybofey is also on the horizon, before they get their European campaign underway next month.

One of Rovers’ biggest strengths is the size of their squad, and something that Lopes says will be important over the next few weeks.

"We always stress how important the squad is, that has been evident already this season where you have seen people come on making impacts.

"Europe has always been a goal of mine and the team’s since I have been here, to try and make the group stages and we will definitely be going hard at it this year to try and crack that."

Rovers have been drawn against Malta side Hibernians in the first qualifying round of the UEFA Champions League, with the first leg taking place in Tallaght on the 5th of July. The game will be shown live on RTÉ 2 and the RTÉ Player.

Watch Shamrock Rovers v Bohemians live on Friday on RTÉ2 and RTÉ Player from 7.30pm, follow our live blog on rte.ie/sport or on the RTÉ News app.