On the night they paraded world champion boxer Amy Broadhurst at Oriel Park, it was Robbie Benson who delivered a late knockout blow for Dundalk against Shamrock Rovers to breath life into the SSE Airtricity League Premier Division title race.

The 30-year-old popped up 10 minutes from the end to steer a stunning cross from Lewis Macari into the net to close the gap at the top of the table to just five points, with Stephen O'Donnell’s side still having a game in hand over the league leaders.

It was Benson’s 12th career goal against the Hoops and his first league goal for Dundalk at Oriel Park since scoring in the 3-2 victory over the Tallaght men in 2019, which secured the Louth men’s last league title.

The result was no more than the Lilywhites deserved having dominated possession against a Rovers side who more often than not took the route one approach without the guile of Jack Byrne and Graham Burke. 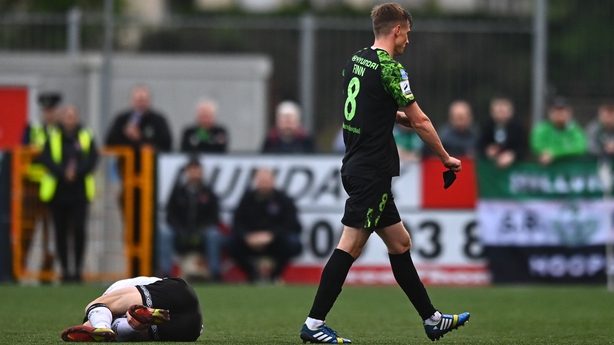 Stephen Bradley’s side – who finished the game with 10 men after Ronan Finn’s late dismissal – will still be hot favourites for the league title despite this setback, but this result ensures they won’t hang on to it without a fight.

It was the home side who were first to threaten, with Patrick Hoban heading just wide from Steven Bradley’s inswinging free from the left on six minutes.

Danny Mandroiu and Richie Towell then both had acrobatic efforts off target for Rovers at the other end before Andy Boyle headed agonisingly wide after getting on the end of another Bradley free-kick on 20 minutes.

Rory Gaffney then sliced wide five minutes later after outmuscling Boyle to get on the end of an Alan Mannus clearance.

The 32-year-old then conjured up the first and only shot on target of the half a minute later when he picked up Darragh Leahy’s headed clearance at the edge of the box, only to see his effort go straight into the arms of Nathan Shepperd despite a deflection off Paul Doyle.

Lee Grace had a great chance to give Rovers the lead on the half-hour mark when he rose highest to meet a Dylan Watts corner but the centre-half couldn’t get the correct purchase on his connection as it drifted harmlessly wide.

Dundalk would also have a big chance from a corner a minute before the break when Greg Sloggett’s delivery was flicked on at the near post by Mark Connolly, with the ball flashing across goal only to end up going out for a throw on the far side.

Some of the home support felt their side should have had a penalty in first-half stoppage time when Sean Hoare pushed Sloggett into the advertising hoardings as he attempted to let Connolly’s free-kick drift out of play, but referee Neil Doyle was uninterested in their pleas.

Gaffney would go close for Rovers within two minutes of the restart when he fired into the side-netting.

Rovers then had a let-off on 52 minutes when Leahy’s corner dropped for Connolly, only for the ball to slip under his feet with Mannus diving on it before Boyle could pounce.

Doyle then had two efforts sail over in quick succession – the first a shot from range and the second with his weaker right foot after a corner broke to him just inside the box. 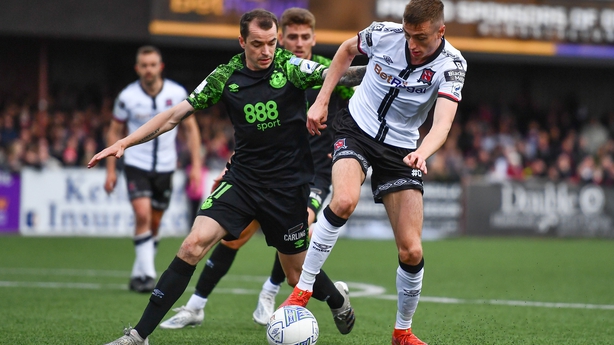 Daniel Kelly then had a curling effort headed clear by Hoare on 64 minutes before another long-range effort from Doyle sailed over five minutes later.

Towell and Gary O’Neill then had efforts from distance themselves at the other end but neither could find the target.

Then came the breakthrough on 80 minutes. Hoban did superbly well to control Sam Bone’s pass on his chest before holding off Roberto Lopes to work the ball out to the right to Macari.

The on-loan Stoke City youngster then delivered a superb ball into the box which the inrushing Benson met with a left-foot volley to send Oriel Park into raptures.

Things then went from bad to worse for the Hoops three minutes later when captain Finn was sent off for a high challenge on Leahy, with the visitors having no chances after Benson’s strike to rescue at least a point. 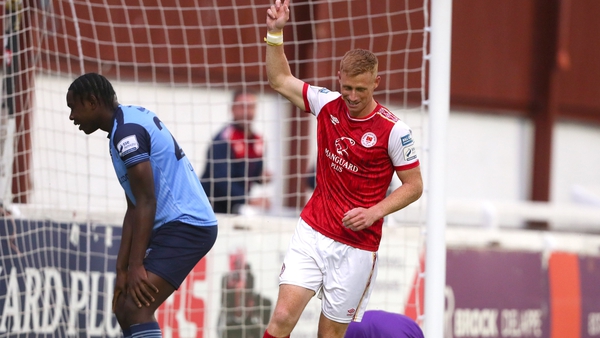