England's winless start to their Nations League campaign continued as they were held to a 0-0 draw at home by a youthful Italy side at a near-empty Molineux on Saturday.

The first meeting between the nations since the tumultuous Euro 2020 final at Wembley last year was a tame affair with precious little to cheer for the 2,000 children allowed to attend despite a UEFA ban.

England's Aaron Ramsdale was the busier of the two keepers, with crucial saves in the first half to deny Sandro Tonali and Matteo Pessina as Italy cut through England's defence.

With Harry Kane left on the bench until the 65th minute, England lacked attacking spark and the closest they came to scoring was Mason Mount's first-half shot against the bar.

Raheem Sterling wasted a glorious opportunity after the break but England did not do enough to earn the win.

Gareth Southgate's side are bottom of Group A3 with two points from their opening three games while Italy, who failed to qualify for the World Cup, are top with five points.

England host Hungary on Tuesday while Roberto Mancini's Italy are away to Germany.

The match was played without fans as part of a UEFA punishment for crowd trouble during last year's Euro 2020 final at Wembley which Italy won on penalties.

Germany came from a goal down and survived late pressure to rescue a 1-1 draw against hosts Hungary for their fourth consecutive draw.

The Germans, undefeated under coach Hansi Flick with eight wins and four draws, needed a ninth minute equaliser through Jonas Hofmann to earn a point.

They have now drawn their three Nations League matches, including against Italy and England earlier this month, and were also held 1-1 by the Dutch in a friendly international in March.

The hosts took a surprise lead in the sixth minute when Germany goalkeeper Manuel Neuer punched a Roland Sallai header away but Zsolt Nagy drilled the rebound past the keeper and into the roof of the goal.

Germany's Hofmann, who had also scored in their 1-1 draw against England on Tuesday, levelled only three minutes later, latching onto a deep, pin-point cross from Nico Schlotterbeck to round the keeper and slot in.

Hofmann should have added another in the 70th when he again charged through but instead of finishing the move himself, he attempted to lay it off for Timo Werner before his assist was intercepted in front of goal.

Davy Klaassen and Denzel Dumfries scored second-half goals as Netherlands rallied from two down to secure a 2-2 draw against Poland in an entertaining Nations League A clash.

Home captain Memphis Depay missed a late penalty that would have secured all three points for his side as he struck a post, but the result sees the Dutch top Group Four with seven points from their three games, three ahead of Belgium and Poland.

The Poles, seeking a first ever victory against their hosts in the Netherlands, led 2-0 just after half-time as English-born Matty Cash and Piotr Zielinski scored, much to the delight of their sizeable contingent of travelling fans in the stadium.

But a frenzied five minutes in which Poland got their second goal and the Netherlands responded quickly with a double strike turned the game on its head, before Depay wasted the late chance to complete the home side's comeback.

Netherlands host Wales on Tuesday in their final game of this international window, while Poland welcome Belgium on the same day.

Wales held Belgium to a 1-1 draw to claim their first point in their group campaign after Brennan Johnson scored a late equaliser to cancel out a Youri Tielemans goal in Cardiff.

The result still leaves Wales at the bottom of the group at the halfway stage.

Wales nearly had the perfect start when Ethan Ampadu fired a half-volley into the top corner in the fifth minute but his joy at scoring a first international goal was short-lived after VAR chalked off the effort for an offside in the build-up.

Belgium dominated possession in the first half but it was Wales who created better chances, with Gareth Bale and Connor Roberts both going close to opening the scoring but shooting over.

However, Belgium pounced five minutes into the second half when a slick passing move down the right finished with Michy Batshuayi patiently holding up the ball in the box before Tielemans arrived and drove his shot into the bottom corner.

But Wales equalised in the 86th minute when Aaron Ramsey's fine footwork allowed him to find his fellow substitute Johnson who scored with aplomb, with VAR overruling the linesman's flag for offside after a nervous wait for the home side.

In the Republic of Ireland's group in League B, Ukraine beat Armenia 3-0 in the Polish city of Lodz.

Ruslan Malinovsky, Alexander Karavaev and Vitalii Mykolenko scored all three goals in the second half.

Stephen Kenny's Irish side will take on the Ukrainians in Lodz on Tuesday in the final game of the June window.

The victory over Armenia means Ukraine lead the way ahead of Ireland in League B Group 1 with a game in hand, having beaten the Boys in Green at the Aviva Stadium on Wednesday. 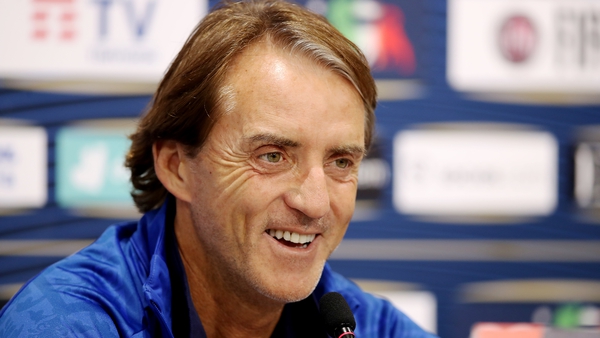 'Football without fans is not football' - Mancini