The midlanders, who have yet to appoint a permanent manager since parting ways with Martin Russell in April, were going to remain bottom at the close of play regardless of the result against Friday night's visitors.

But they gave themselves a boost in the battle to avoid finishing bottom of the League of Ireland second tier.

However, a goal from Thomas Oluwa just three minutes after that equaliser gave the hosts a half-time advantage.

Ubaezuonu scored his second just after the resumption to give Athlone breathing space temporarily but Jake Hegarty reduced their advantage to one. 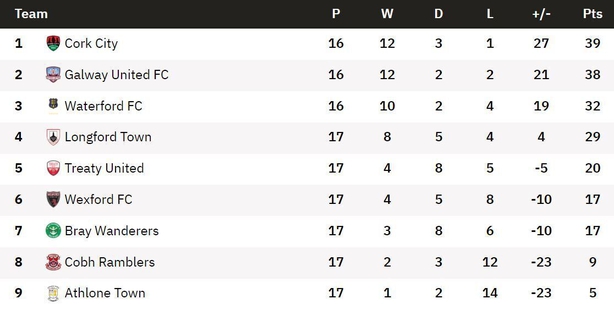 Athlone saw out the game with goals from Daniel Dobbin and Oluwa, joining Ubaezuonu in scoring a brace, just after the hour to seal a 5- 2 victory and their first of the campaign.

They move onto five points, four adrift of eight-placed Ramblers.

Further up the table, Athlone's midland rivals Longford Town are fourth after a 1-1 draw at home to 10-man Bray Wanderers.

Eoin Massey saw red for the Seasiders after incurring a second yellow card with 15 minutes to go but Bray held on for a point.

Wexford and Treaty United are fifth and sixth respectively after also drawing 1-1 in their game at Ferrycarrig Park.

Both goals came within six minutes of the start, Dean George opening the scoring for the Limerick club before Aaron Dobbs equalised for Wexford.

Follow Italy U21s v Republic of Ireland U21s (Tuesday, 5pm) via our live blog on rte.ie/sport or on the RTÉ News app. Watch live coverage on RTÉ2 and RTÉ Player commencing at 4.30pm