The Republic of Ireland fell to a very disappointing 1-0 defeat against Armenia in Yerevan on Saturday afternoon.

A competitive debut for the No 2 after Gavin Bazunu was ruled out with a back injury. Tigran Barseghyan flashed an early warning with a snap shot that had to be dealt with and when the same player curled an effort into the top corner after 55 minutes the lineman's flag for offside was a welcome sight. However there was no reprieve when Eduard Spertsyan blasted a long-range shot which struck the post and went in.

Another one in the defence making his bow at this level having previously had a taste of friendlies. There were two sloppy moments in possession within the opening 10 minutes, one of which led to Shane Duffy picking up a booking. The manner in which he regained composure and seemed so assured on the right side of the back three bodes well. A bright spot on a poor overall showing.

Had be careful after that early yellow card for a lunging tackle on Barseghyan. Like so many others, a lack of match sharpness, not to mention the heat, made it hard for him to find any rhythm. One tame header from a corner easily saved but did ensure the defensive line was held when Armenia had a goal disallowed for offside.

Fortunate not to get a caution for two mistimed challenges in the first-half and he was unable to set a tone for Ireland by starting sharply and taking the ball out from defence. Looked more and more unsettled as the game went on and Ireland lost control of a game which they seemed to at least have a grip on without breaking the deadlock. Flashed a later header at the back post wide. 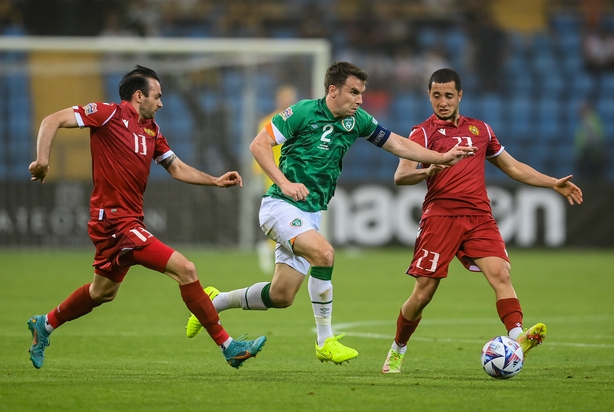 Did his best to offer support in attack and thought he might have forced a VAR review for a handball when he fired a cross off a Georgian defender from close range in the box. He was caught for pace a couple of times defensively and Collins was there to help sweep up. Barely crossed the half way line in the second half before he was replaced by Will Keane as Ireland went in search of an equaliser.

Delivered one pin-point free kick right on the stroke of half-time which Chiedozie Ogbene met with an unmarked header. Unfortunately the striker couldn’t direct it between the posts. Cullen did help settle his teammates down after that poor start but it was his set-piece delivery that was most impressive. He played the pass into Michael Obafemi that led to the substitute losing the ball in the build up to their opener.

He was one of the few in a green jersey whose early passing was sharp, and it seemed clear that his priority was to try and link directly with Callum Robinson and Ogbene with forward passing rather than play square balls or use the flanks. He faded after this promising start, though, and wasn’t able to ensure Ireland kicked on after the break as the hosts got stronger. Was the closest body to Spertsyan when he struck but couldn’t close down. Booked late on.

Poor performance, like so many others. It was his needless square pass which led to Armenia breaking in the 55th minute and finding the net, only for the offside flag to save Ireland. He overhit one cross to the back post that was part of a set-piece routine and the Sheffield United man was substituted in the 73rd minute just before the game’s decisive moment.

The young striker was sprung from the bench during the last international window and produced a sensational injury-time winner against Lithuania. But he was the first player to be hooked by Stephen Kenny here as Ireland laboured. His positive running was a bright spot in the first half but his influenced waned by the time Michael Obafemi replaced him in the 65th minute. 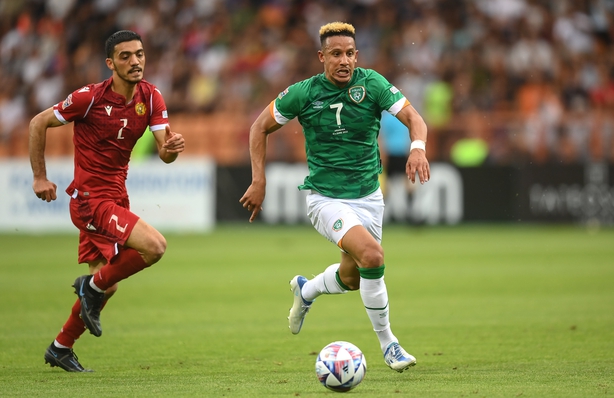 His early running in behind offered an outlet to the Ireland midfielders, most often Hendrick, and he struck a snap shot wide at the near post in the 12th minute. Four minutes later he had another shot cleared off the line after finding space in the box to meet Chiedozie Ogbene’s pull back. Was on the end of a couple heft challenges from the superb Varazdat Haroyan at the heart of the Armenia defence.

Once again he was Ireland’s liveliest and most energetic attacker. Some of his runs, and the timing of them in behind, were top class but he will look back at his header from Cullen’s free-kick right on half-time as the chance that got away. Armenia captain Haroyan did marshal him well in one-on-one situations and he was dropped to a wing-back role as Ireland threw more strikers into the box late on.

There will be an inquest into Obafemi losing the ball when it was played into his feet by Cullen just before the Armenia goal. Didn’t have a sniff of a chance after that.

A couple of crosses near the end but not much else.

Overhit one cross in a good position and couldn’t inject energy required. 5

Tried to get on the ball centrally but couldn’t make an impact.

Will Keane (for Coleman 81)

Lurking at back post near the end when Ogbene overhit a cross.