Live coverage of all the build-up and match action from Armenia from 1pm on RTÉ2. Streaming live online on RTÉ Player.

Live radio coverage of the match on RTÉ Radio 1.

It's going to be a hot one in Yereven. Conditions will be testing for the Ireland squad and should suit the home side with the forecast for temperatures to hit up to 34c come kick-off time with little cloud coverage.

Stephen Kenny’s side travel to Armenia surprisingly still looking for their first ever win in the Nations League competition.

Three draws in their last campaign was enough to narrowly see them avoid relegation to League C with Bulgaria, a point worse off, the side to make the drop.

Despite that poor record, there’s a resurgent feel about this Ireland squad who are now unbeaten in their last seven games, having reconnected with their support base.

Draws with Belgium and Portugal point towards a bright future for Kenny’s young squad and he’ll be eager to get the first win of this Nations League campaign under his belt in Armenia.

The Armenians are newly promoted to League B following a successful Nations League campaign last time out, but they’re more than 40 places below Ireland in the FIFA world rankings and their main aim this time out will be to avoid relegation.

Their form guide is almost the opposite of Ireland’s as a 1-0 victory over Montenegro on March ended a nine-match losing streak, but was followed by a 9-0 hammering against Norway.

ARMENIA ARE HUNGRY FOR REVENGE

Despite their poor form, Armenia will go into the game believing they can get a result and they have plenty on motivation to do so.

It may not have made the same headlines or impact in Ireland as Armenia but our 1-0 victory over today host’s Euro 2012 qualifying campaign remains a major bone of contention.

An own goal and a Richard Dunne effort were enough to secure Ireland a 2-1 win but Armenia remember the game more for poor refereeing decisions, the worst of which saw goalkeeper Roman Berezovsky sent-off for a handball outside the penalty area that never took place.

It may not be Thierry Henry handball level but at a time when they were enjoying their best qualification campaign to date, it’s a result that sticks in the craw.

Speaking on the RTÉ Soccer Podcast, Armenian journalist and commentator Robert Gasparyan said: ""I think that your fans when they come to Yerevan, they will see that the Armenia national team fans still remember that match. They want to have revenge, definitely."

How well the hosts are equipped to extract that revenge is unclear however and given their poor form and the absence of talismanic attacker Henrikh Mkhitaryan, who retired from international soccer in March, Gasparyan is not feeling hopeful.

"I think the Irish team will have the opportunity to win - again - in Yerevan with two or three goals," he said.

KENNY LOOKS POISED TO GIVE OBAFEMI A START

Michael Obafemi is back in the Ireland fold having previously been left out of the squad at his own request for the recent friendlies with Belgium and Lithuania as he looked to manage some niggling injuries.

That break seemed to work wonders for the Irish striker who finished the Championship season on fire, playing every second of Swansea’s final eight league games and scoring 12 goals in his last 16 matches.

With Adam Idah absent until the start of next season following knee surgery, Kenny looks likely to turn to Obafemi to lead the line in Yerevan, with Callum Robinson and Jason Knight in behind him.

The Ireland manager has previously worked with Obafemi at underage level and sees continuous improvement in all aspects of his play.

"Adam is taller than Michael but they have similar attributes, both with pace and ability to make forward runs. Michael has improved his back to goal stuff in a major way too. I'm not saying Michael is going to start because other players have done well but he’s really impressed me this week."

Elsewhere Kenny was handed a late scare over the fitness of goalkeeper Gavin Bazunu who appeared to pick up a back injury in a training session on Thursday.

However the Ireland manager is confident that Bazunu will recover in time and even if he didn’t, there’s plenty of cover in the shape of Caoimhin Kelleher and Mark Travers.

Ireland have a clean bill of health elsewhere and Josh Cullen is available after being mistakenly included on the suspended list, so the Ireland boss is almost certain to stick with his favoured 3-4-3 formation.

Follow Armenia v Republic of Ireland (Saturday, 2pm) via our live blog on rte.ie/sport or on the RTÉ News app. Watch live coverage on RTÉ2 and RTÉ Player commencing at 1pm with live radio coverage on RTÉ Radio 1. 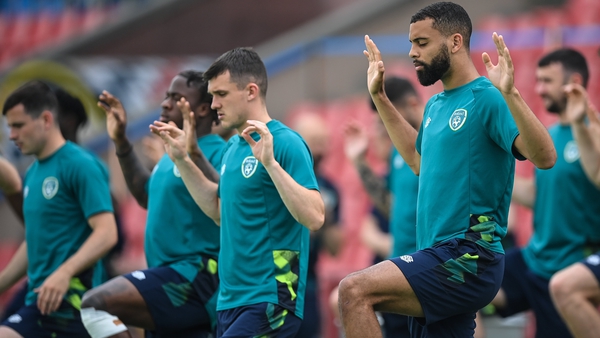 Victory vital in Armenia as Nations League kicks off