The Republic of Ireland produced a clinical performance at Tallaght Stadium to sweep past Bosnia and Herzegovina and pick up a crucial three points in their quest to make the UEFA European Under-21 Championships.

Will Smallbone's 17th-minute effort - following a first-time lay-off from Mipo Odubeko - separated the sides after a cagey first half.

Powerful, low shot from Will Smallbone finds the net underneath the body of the goalkeeper to give #IRLU21 a 1-0 lead against Bosnia & Herzegovina #COYBIG | #WeAreOne #rtesoccer pic.twitter.com/sLJBFLRJbh

However Ireland were indebted to Derry City stopper Brian Maher for keeping their lead intact. He pulled off a brilliant save to deny the impressive Jasmin Osmic just before the hour mark.

That came moments after Lee O'Connor had cleared Tarik Muharemovic's header off the line, but Ireland then produced a sucker-punch as Odubeko finished off a high-quality counter involving Ross Tierney to make it 2-0 on 63 minutes.

Smallbone struck again with nine minutes to go to make absolutely sure of it as the Boys in Green set up a massive climax to their campaign.

The local boy strikes in Tallaght as Mipo Odubeko fires #IRLU21 2-0 up against Bosnia & Herzegovina after a nice pass through by Ross Tierney #COYBIG #rtesoccer pic.twitter.com/hC9YQe81WW

They remain third in Group F, one point behind Italy and Sweden. Crucially, the Irish have a game in hand on the Swedes.

They next face Montenegro at home on Monday, before travelling to Italy for their final group match on 14 June. Sweden host Italy on Thursday next in another game that will have major ramifications.

Two more wins could see Ireland win the group but a play-off place would still represent a fine campaign, and keep alive their dreams of making a finals at this grade for the first time.

The only black mark for Ireland was a bad injury to defender Oisin McEntee; he dislocated shoulder when contesting a corner in the second half.

Second goal of the night for Will Smallbone, an easy tap-in at the back post, to put #IRLU21 3-0 up against Bosnia & Herzegovina. Good work in the lead-up from sub Ollie O'Neill #COYBIG #rtesoccer pic.twitter.com/0k4mXn6XaV

"It gives us a real opportunity to get into the play-offs," manager Jim Crawford told RTÉ Sport afterwards.

"Monday is a huge game for us - probably the biggest Under-21s game there's ever been here (in Tallaght).

"Montenegro are a decent outfit. They drew with Italy in the last window so it just shows the pedigree they'll bring here." 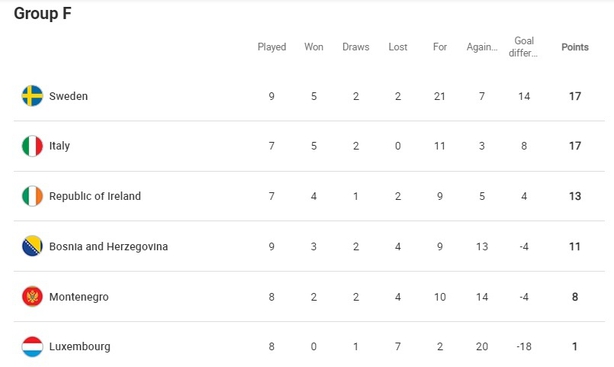 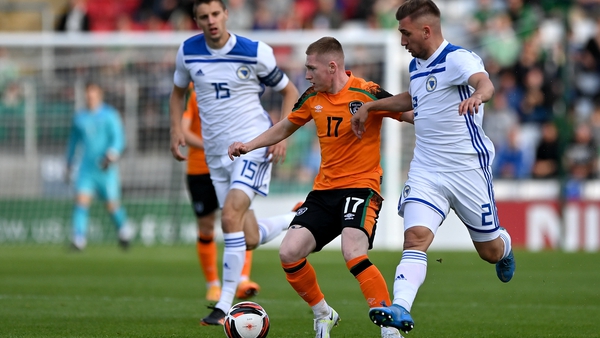