Former Liverpool midfielder Didi Hamann believes the club's defeat in the Champions League final represents more than just a loss and may prove to be a turning point.

The Reds' hopes of adding a seventh European Cup triumph to their roll of honour was dashed by record champions Real Madrid who won 1-0 in Paris on Saturday night, with the Spanish side's goalkeeper Thibaut Courtois denying them time and again.

It was a disappointing end to a campaign for Liverpool that had seen the Merseysiders challenge for an unprecedented quadruple until late in the season.

However, before losing the Champions League final, Jurgen Klopp's side also narrowly missed out on Premier League glory to Manchester City, and ultimately have had to settle for wins in the FA Cup and Carabao Cup.

Speaking on RTÉ Sport's live coverage of European club football's showpiece, Hamann said he believed it will be a major challenge for Klopp to lift the current squad.

"I think sometimes you've got to freshen things up because this group of players have been together for a long time and they've done exceptional things," said the former Germany international, who was part of Liverpool's 2005 Champions League-winning team.

"But what I'm saying is, you go away from the camp tomorrow, you've played the season of your lives and you end up with two domestic cups and the two biggest prizes you haven't won.

"Now psychologically you come back next season and the lads might be thinking, 'What do we have to do to win the Premier League or the Champions League because we couldn't have done any more than we did this season?'

"And you may lose one of your best players or two of the best players (Sadio Mane and Mo Salah) so I think psychologically for the manager, it's a huge, huge job.

"I really think it could have a bearing, it could have a negative impact on what's to come. Because there are international games now and they've got three weeks holidays and then they're back.

"So it won't be any easier to win the Champions League next season because their run to the final, if you compare it with Madrid's, was rather easy.

"So I think could have a bigger impact than just losing a game tonight." 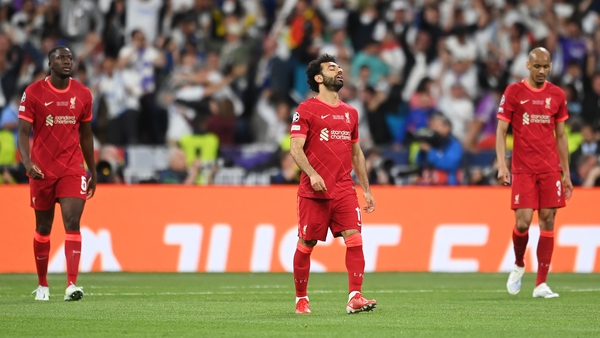