Levi Colwill's own goal sent Nottingham Forest into the Premier League for the first time in 23 years in a 1-0 Championship play-off final win over Huddersfield at Wembley.

Luckless centre-back Colwill put through his own net after James Garner's teasing cross, that Jack Colback ducked under and Ryan Yates failed to reach.

Chelsea's 19-year-old loanee Colwill has impressed hugely at Huddersfield and will have the chance to battle for a first-team spot at Stamford Bridge later this summer.

But the talented teenage defender ended a fine season in most miserable fashion, handing Forest a return to the big time that the City Ground men have craved for so long.

Forest were bottom of the table and winless when Steve Cooper took charge in September - now they have won football's most lucrative match and are headed to the top tier.

Financial experts rate the Championship play-off final as worth at least £170 million to the winners, and Forest will now enjoy a major cash injection to go along with the glory of a long-awaited return to the top.

Forest players like defender Djed Spence were not even born the last time the two-time European Cup champions tasted Premier League action back in 1999.

But a season that started in turmoil when former Ireland international Chris Hughton was sacked after seven winless matches and just one point in September, now Forest have pulled off a remarkable turnaround.

Former Swansea boss Cooper's transformation of this Forest squad might not have been completed in the most enticing of fashion.

But the hordes of Forest fans crammed into Wembley will not care one jot.

Carlos Corberan's Huddersfield can count themselves hugely unlucky on an afternoon where they simply failed to fire.

But two flimsy penalty shouts aside, Corberan's men were ultimately toppled by the better-organised side, albeit amid slender margins.

Forest always had the better of a scrappy encounter, with Yates wasting a fine chance when heading wide from Garner's teasing free-kick.

The midfielder blazed high and handsome from 18 yards in another half chance for the City Ground men.

Just when both sides looked happy to turn around in stalemate though, Forest forced the breakthrough.

Another testing ball from the ever-influential Garner was first ducked by Colback then missed by Yates - and the two close shaves left Colwill as the fall guy.

The young Chelsea prospect was forced into connecting with the ball, and could only divert into his own net.

Forest flagged after the break, with Jonathan Hogg heading over from a corner as Huddersfield pressed hard in search of a leveller.

Harry Toffolo thought he had earned the chance for his side to hit level terms when ending in a heap in the box after stepping past Colback.

Referee Jon Moss first booked Toffolo for diving, then a VAR check ruled out any chance of a penalty.
Huddersfield were left incensed by the call, but also still trailing their east midlands foes.

Another penalty shout was even more quickly dismissed when Max Lowe tangled with Lewis O'Brien, with Huddersfield again denied a spot-kick.

Huddersfield continued to press right until the death, but Forest clung on, to spark scenes as delirious on the pitch as in the stands. 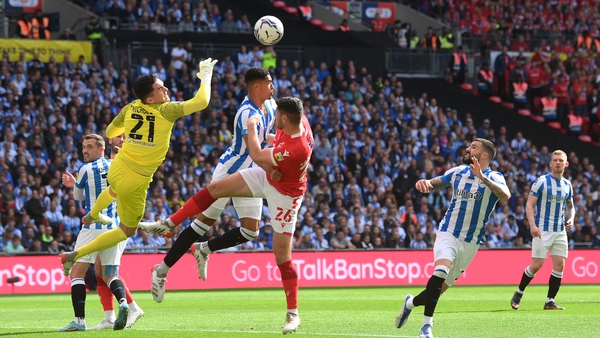