Serving the last of a three game ban, Damien Duff exacted revenge from the stands, overcoming the St Patrick's Athletic side that defeated him on his managerial debut just three months ago, after this win at Richmond Park.

Disguised behind a black hoody, baseball cap and face-covering snood, Duff roared his team on alongside a noisy Shelbourne contingent in the home stand, as goals from Jack Moylan and JJ Lunney cancelled out Joe Redmond’s first-half strike.

The victory was the Drumcondra side’s third win on the bounce, meaning that, ironically, Duff has been serving a touchline ban for 50% of his side’s league victories this season.

However, he will scant care where he watches from as long as the points keep racking up.

This was the Saints’ first home game since their 4-0 drubbing at the hands of Derry City and fans will be further alarmed to see Dundalk – and their former manager, Stephen O’Donnell – have now opened a three-point cushion on them in the race for European qualification.

Shels started the game with the best of possession, looking far improved from the side that suffered on that opening day defeat.

Tonight they were composed on the ball and nasty off it. Saints captain Chris Forrester was hit from behind a number of times during the first-half, but their aggressive style also gave way to attacking nuance.

Employing two strikers is rare nowadays, but Duff's tactic put the Saints back four under pressure all night.

Enjoying a good vein of form after goals in consecutive games, Sean Boyd had an early powerful header saved, and was central to the night’s opening goal.

Redmond made a timely last-ditch tackle to prevent Boyd breaking through, however, his clearance was picked up inside the box by Moylan, who feinted, twisted and fired the ball into the net on the 24th minute mark. 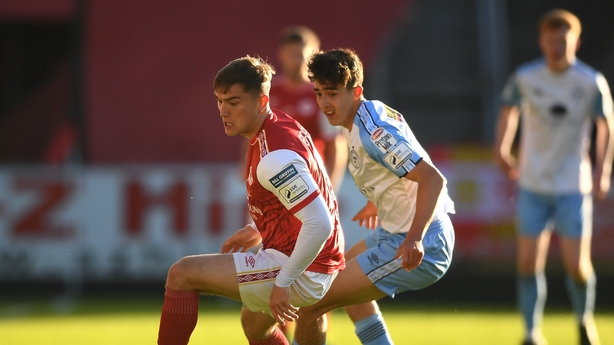 The home side looked rattled in the immediate aftermath but rallied as the half went on. Chris Forrester should have drawn his side level when he blasted a shot over, while Eoin Doyle struck another chance just wide.

Retaining his starting place for the fourth consecutive game, 16-year-old Sam Curtis is one of the Saints’ brightest prospects, but looked inexperienced against tough opposition.

The young right back was hauled off at half-time, but not before proving crucial in the equalising goal.

Collecting the ball on the edge of Shels box, Curtis cut a cunning pass wide to Billy King, who pulled it back for Redmond to hammer home from six yards.

And the second half was just eight minutes old when the visitors regained their lead through ex-Saint JJ Lunney.

The 24-year-old midfielder’s shot from the edge of the box was deflected off a defending body to wrong-foot Joseph Anang in the Saints net.

Tim Clancy introduced Tunde Owolabi and Jay McClelland to chase an equaliser and the former had a well-crafted shot pushed away by Brendan Clarke with 20 minutes to go.

The Belgian striker always looked the closest to bringing Clancy’s side back into contention, but Shels shut up shop admirably, as Clarke stopped another effort from him late on.

Pat’s had a series of late free-kicks but the deliveries were never good enough. Shels fans celebrated long after the final whistle, enjoying every moment of their first league win here since September 2006.