Dawson Devoy exorcised some frustrations in the middle of a patchy season with a well-struck goal, Junior Ogedi-Uzokwe adding a second, as Bohemians took the points in Dublin 7.

Just after the hour mark, the patient home support could laud Devoy's opener against a disappointing Rovers. Ogedi-Uzokwe fluked the second but his efforts deserved it, before Adam McDonnell blasted home a peach to make it interesting at the death.

Sligo looked as if they had come to get a point but rarely looked confident of even that. With five wins to their name so far, Sligo's hopes of European football next season are in jeopardy – though of course, they have that to look forward to this year.

Strangely, Bohs togged out as the away side. The start was a lively one under the Dublin sun. Will Fitzgerald stole in free at the back post from Niall Morahan's cross but he never looked comfortable.

Kris Twardek then chested down to Ogedi-Uzokwe, who seemed to go down rather easily after some contact from Gary Buckley; it was perhaps telling that the Englishman's teammates did not make a major fuss about it. We had only had five minutes of action. 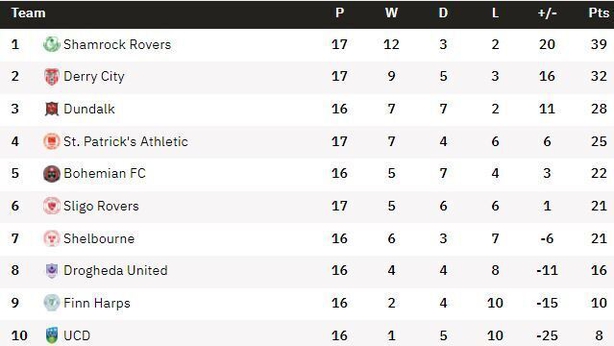 Aidan Keena toiled up top on his own for Rovers, whose collective form coming here was middling at best; he tried to meet a Fitzgerald cross after lovely build-up play but couldn't.

Sligo's defence malfunctioned on 14 minutes and, from a whipped Jordan Flores corner-kick, Ciaran Kelly – who'd scored against Dundalk last weekend – smacked a header off the bar.

Ali Coote entered the action for an injured Twardek midway through the first half. As he was helped off the pitch at the interval, the Canadian looked in some discomfort.

The game had entered a lull before Devoy tested Ed McGinty. Perhaps the loudest roar was reserved for former Shamrock Rovers midfielder Greg Bolger getting a yellow card as half-time approached. That said, Ogedi-Uzokwe outmuscled Buckley to create a chance at the death but he fluffed it.

On the resumption, Coote showed Flores where he wanted a diagonal; it fell for the Scot but he was never hitting the target.

Promise Omochere then held up the ball before finding substitute Max Murphy; he curled to the back post but Devoy, on his left foot, got under his connection. It was a good opening.

Murphy pinged over another smashing delivery for Ogedi-Uzokwe, who was claiming he was being fouled at the back stick. Bohs' pressure was growing.

The goal the hosts fully deserved came on 61 minutes. Fitzgerald lashed the ball straight to Flores; he went on a well-controlled run and, after the ball eventually fell to Omochere, he smuggled it to Devoy, who calmly curled into the top of the net.

Finally, and it took the concession, Sligo showed something, though Fitzgerald pulled a shot off target and then dragged well wide when in a decent position.

Liam Buckley made a triple substitution but the industrious Ogedi-Uzokwe forced a fine save from McGinty just afterwards, reminding the visitors they remained second-best. And the deal was seemingly sealed with 14 left.

Devoy stroked the ball through to Omochere; he made a bit of a mess of the opening but fed Ogedi-Uzokwe, who totally mishit his shot but it still managed to loop over McGinty.

Sligo showed a bit of spirit and sub McDonnell hit a beautiful strike low into the bottom corner with three minutes left. Having blown so many leads this season, Bohs fans briefly had reason to fret.