First Division leaders Cork City made it 11 wins from 14 league outings with a come-from-behind 2-1 victory away to winless Athlone Town. 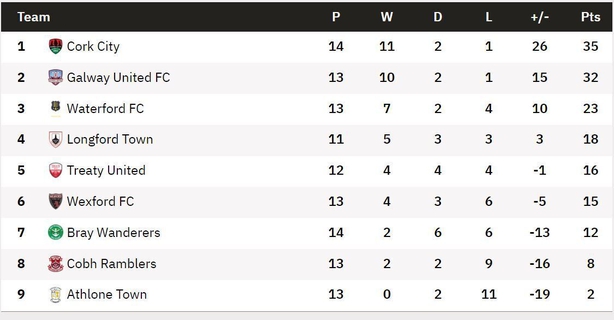 The home side made the perfect start when Thomas Oluwa netted in the opening minute and that was the way it remained until the interval.

Three minutes after the resumption they were reduced to 10 men, Stephen Kenny dismissed for a second bookable offence.

Cian Murphy equalised for City before Oluwa failed to convert his spot-kick. Aaron Bolger was the match-winner in the final minute to keep the Rebel Army three points ahead of Galway United, who also picked up three points tonight.

Two goals from Ed McCarthy and close-range finishes from Max Hemmings and Manu Dimas gave the Tribesmen the 4-0 win over Cobh Ramblers at Colman’s Park in front of 622 spectators.

John Caulfield's side have a game in hand on Cork City.

The drama came late on at the Carlisle Grounds where third-placed Waterford left with a 4-1 victory over Bray Wanderers.

Phoenix Patterson gave the visitors a narrow interval lead and Shane Griffin’s 54th minute goal looked to be sending the Blues to a 2-0 win.

Kevin Knight pulled one back for the Seagulls in the 88th minute, but Leon Britton struck twice at the death to put a better look on the scoreline from a Waterford perspective.