Pep Guardiola feels Manchester City will probably have to improve on their first leg performance against Real Madrid to progress to the Champions League final.

City are 4-3 up in the last-four clash with Real after a pulsating initial encounter at the Etihad Stadium last week.

Speaking at his press conference ahead of Wednesday's semi-final second leg at the Bernabeu, City boss Guardiola said: "Yes, probably we will have to be better (than in leg one to go through).

"But at the same time I would like to tell you one thing - we could play much, much worse than we played and we could win, and not anyone can deny my assessment is right. 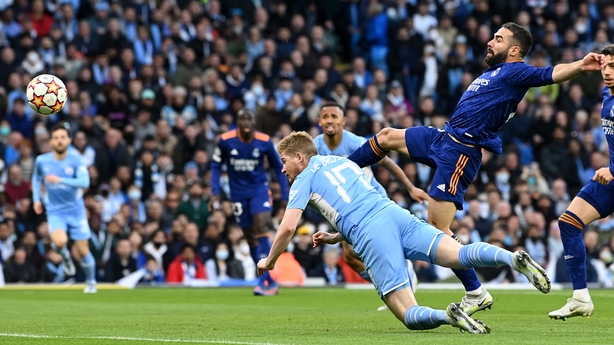 City could have Kyle Walker back in action. The defender, who has been absent for the last five matches while recovering from an ankle issue, has trained and was due to travel with the squad to Spain, with a late decision to be made.

John Stones remains sidelined after coming off in the first half of the victory last week, while Joao Cancelo, suspended for that match, is available.

Real boss Carlo Ancelotti is confident his side can complete yet another fightback to reach final in Paris on 28 May.

Real trailed by two goals to a dominant City three times but repeatedly fought back in an absorbing encounter.

They followed up by clinching their domestic title at the weekend and, after staging recoveries in the previous two rounds, are in bullish mood as they return to the Bernabeu.

Ancelotti said: "We have scored three goals against Paris St Germain, five against Chelsea and three against Manchester City.

"Sometimes you have to take a little risk but we have the quality to do it.

"They have the advantage and we have to improve. It is difficult but we have an incredible opportunity to play another final after having won LaLiga.

"The mood is very good and we can do it."

Real are without key defender David Alaba through injury but the influential Casemiro is fit to feature in midfield.

Casemiro's availability, having only been fit enough for the bench last week, gives Ancelotti a selection poser over whether or not to retain the in-form Rodrygo, who has scored four goals in his last five games.

Rodrygo took Casemiro's place last week but moved into an advanced position alongside Vinicius Junior and the prolific Karim Benzema - the two goalscorers - with Federico Valverde dropping into midfield.

With the experienced pair of Toni Kroos and Luka Modric in the centre, Real will not lack the quality needed to prevail against a formidable City side.