SSE Airtricity League pacesetters Cork City and Galway United recorded wins over Treaty United and Longford Town respectively on Monday, while Waterford's improved form continued after they got the better of Athlone Town.

Three goals in five second-half minutes saw Cork prevail at Turner's Cross. Treaty, however, proved a tough nut to crack in the opening half. Ruairi Keating and Matt Healy had the best of the chances for a home side, lacking in intensity.

The breakthrough came on 64 minutes, with Keating firing home from the edge of the area. Healy doubled the lead three minutes later when he was put through for a simple finish.

Cian Bargary found himself unmarked in the penalty area and volleyed home to complete the scoring on 69.

Again the goals came in the second period at Eamonn Deacy Park. Substitute Ed McCarthy ran at the Longford defence, before being fouled by Michael McDonnell. The referee pointed to the spot, with David Hurley confidently striking home the resulting spot kick on 50 minutes to set Galway on their way

The lead was doubled on 73 after the visitors failed to deal with a Conor McCormack free kick. Max Hemmings was on hand to fire home through a crowded goalmouth for what was his first goal for the club.

Louis Britton earned 10-man Waterford an unlikely win over Athlone Town as the Blues continued their upturn in form at the RSC.

The hosts saw Richard Taylor sent off for two yellow cards before half-time.

Despite the disadvantage, managerless Waterford still mustered some attacks and broke the deadlock 16 minutes from time.

Britton linked up with Phoenix Patterson and received the ball back from his team-mate before finishing well.

It's a boost to the Blues who record back-to-back wins since parting company with Ian Morris. Gary Hunt and David Breen remain in interim charge. 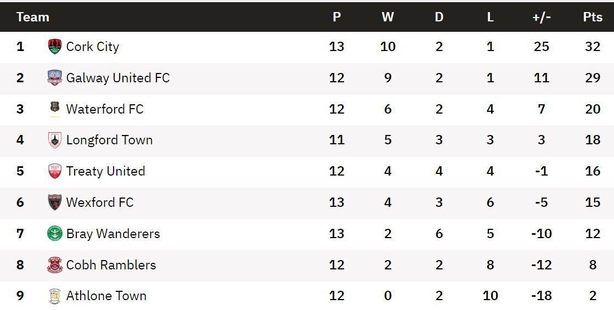 Alex Moody saved a late penalty as Wexford and Bray Wanderers failed to make ground on the promotion-chasers at Ferrycarrig Park.

Ben Feeney had given Wanderers the lead after just seven minutes into the game before Harry Groome brought the home side level 10 minutes later.

Dinny Corcoran hit the crossbar for Wexford as the teams were level at the break.

Corcoran was again denied in the second period but it was the Seagulls who fluffed the chance to win it two minutes from the end of normal time from the spot as it finished 1-1.