Pep Guardiola's delight with Manchester City’s swashbuckling win against Real Madrid outweighed any frustration about their inability to put the Champions League semi-final to bed in a jaw-dropping first leg.

The leaders of the Premier League and LaLiga met under the Etihad Stadium lights on Tuesday evening, when onlookers were treated to an astonishing encounter that leaves the tie on a knife edge.

City had roared out the blocks and celebrated early goals by Kevin De Bruyne and Gabriel Jesus, only for Karim Benzema to expertly fire home after the dominant hosts failed to add to their advantage.

Phil Foden scored early in the second half but Vinicius Junior replied almost immediately, with Bernardo Silva striking home a thunderous effort as City stepped up a gear.

But Madrid again reduced the deficit when Benzema scored an outrageous dinked penalty to leave the score at 4-3, adding spice and intrigue to next Wednesday’s second leg at the Bernabeu.

"It was a good game of football – both teams with an incredible amount of quality players on the pitch with incredible personality to play," City boss Guardiola said.

"The result is what it is. We won, we are going to rest, then play Leeds and travel to Spain next week. To win this competition, from my small experience, you have to overcome situations like football gives in front of you.

"The result could be better, but Madrid is always Madrid. It doesn’t matter if 1-0 up or two or three, you have to perform really well [over] two games. We performed really well the first one. We have to do it the second one. It is a good test to show our personality as a team and we are going to travel there to win the game."

"4-3 is still a good score for us" - City goalscorers Bernardo Silva and Phil Foden reflect on seven goals and a superb night of #ChampionsLeague football in Manchester #MCIRMA pic.twitter.com/KHaFihjHJj

Asked if he was upset about City’s numerous missed chances, Guardiola said: "We miss them but we create them. We were there all the time. We were there. Listen, not one complaint about the result, the performance, anything.

"I am so proud, I’m so incredibly happy of the way we performed in front of the world against a team that have an experience with that. We did everything to win and with courage, with the ball, without the ball."

Guardiola repeatedly expressed pride at his side's performance, but there must be a nagging feeling that City could have put this tie to bed given their opportunities and spells in the ascendancy.

"If we play the way we did in the second half against Real Madrid, we won’t be able to win," he said.

"But if we play the way we did at periods today we’ll be able to do it. We want to see ourselves in such an important setting as the Santiago Bernabeu. We want to be there to put on a good show.

"That’s what I want to tell my players to do – don’t think about anything else, think about going to the Bernabeu and putting on a good show, which could give you a victory. When I became a footballer, then as a manager, when I went with Bayern Munich there, you have to be yourself and really be truly yourself otherwise you’ve got no option to win."

Madrid have already dug deep to edge past Paris St Germain and Chelsea to reach the semi-finals, and the Bernabeu is primed for another special night next week. Carlo Ancelotti’s side had looked in danger of being blown away at times on Tuesday but somehow escaped trailing by one goal.

"It is a defeat that leaves us alive in the second leg," the Italian said.

"We have to be better in our defensive aspect but I believe we are able to create problems for them also. Similar game? It’s really difficult to have and to see this open game as it was tonight. It will be a different game.

"Of course Manchester City has the advantage, we have to consider this. Not a big advantage. We hope that our supporters can help us to play better and try to go to the final."

"We conceded four goals. We have to better. But we scored three and everything is still open for the second leg," - Real Madrid goalkeeper Thibaut Courtois is hoping for a better performance from his team in the #ChampionsLeague semi-final second leg against Man City next week pic.twitter.com/Amejw9WYKZ

Benzema was in a confident mood after scoring a brace and the French striker predicted his team would now qualify for the final.

"I warn our fans to be ready to see something magical, we will win the second leg at Santiago Bernabeu," he told Movistar Plus.

"Losing is never good and we care a lot about winning the Champions League this season. The thing is we never lowered our guard and kept fighting until the end."

"This is the highest level and we were playing against a great team and at their stadium. We fell 2-0 down but were mentally strong to fight back."

Vinicius Jr, who scored a magnificent individual goal, said Madrid's fans would need to get behind them for the return encounter "like never before". 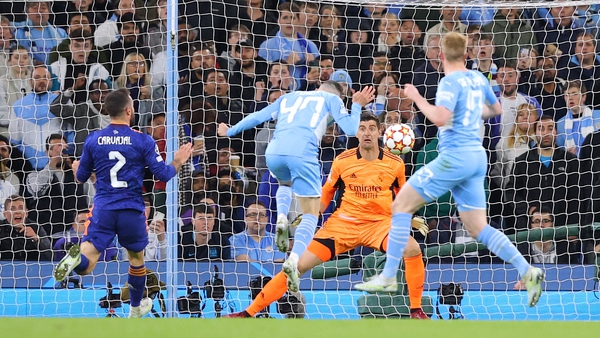