The bragging rights in Cork belong to Cork City Football Club for the second time this season as they beat Cobh Ramblers 3-2 in a highly entertaining first division clash at St Colman's Park on Friday night.

It wasn’t straightforward for the league leaders though as despite leading 2-0 by the half an hour mark, they eventually needed Cian Coleman’s header to end Ramblers' fight back and secure their first victory in Cobh since 1989.

City manager Colin Healy made two changes from his side that defeated Waterford 2-1 in yet another Munster Derby last time out with Barry Coffey and Darragh Crowley coming in for Matt Srbely and Jonas Hakkinen.

The visitors dominated the early exchanges and were fully deserving of the opening goal when it came in the 14th minute as Matt Healy’s superb cross from the right flank was stabbed home by Ruairi Keating.

Things got even better for the Rebel Army by the 30th minute as they doubled their lead when Healy, who scored a sensational goal last time out against Waterford, added another incredible strike to his collection when he found the bottom right corner with a sweet half volley that clipped the inside of the far post. 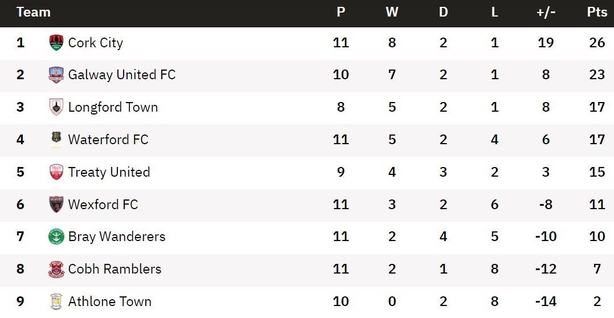 Ramblers boss Darren Murphy also made two alterations from his starting eleven that defeated Athlone Town 3-2 on Easter Monday but one was enforced as goalkeeper Sean Barron picked up a knock in the warm-up and was replaced by Andy O’Donoghue while Ben O’Riordan came in for the suspended Harlain Mbayo.

Ramblers gave themselves hope moments later as they reduced the deficit when Beineon O’Brien Whitmarsh came back to haunt his former club - he swapped City for Cobh during the off-season - as he nodded Brendan Frahill’s header into the roof of the net.

City were left to rue two goals being ruled out for offside - Cian Murphy and Barry Coffey frustrated by the linesman’s offside flag - as Ramblers battled back to make it 2-2 at the beginning of the second half when Conor Drinan blocked David Harrington’s clearance back into his net.

But the Leesiders grabbed what proved to be the winner with 20 minutes remaining when captain Coleman thumped his header into the back of the net from close-range following a corner.

Both sides could have scored again in a frantic finale with Ramblers having two shots cleared off the line while Matt Srbely also struck the post before Murphy somehow blasted over the gaping goal as City just hung on to an important win.

The Blues won 2-0 at Wexford thanks to Patterson's goals in each half.

Victory lifts Waterford up to fourth in the table, nine points adrift of Cork City.

They are also six behind second-placed Galway United who saw off visitors Bray Wanderers 2-0 through goals from Stephen Walsh and David Hurley in each half.