Eoin Doyle scored twice as St Patrick’s Athletic made it a double over Finn Harps this season with a deserved victory at Richmond Park.

Clancy made six changes from the side that came from behind to beat UCD last Monday, with midfielder Ben McCormack rewarded with his first start of the campaign after making a big impact off the bench in that 2-1 win.

But it was Harps, with four changes from their home defeat to Sligo Rovers on Monday, who started on the front foot, winning a corner, that came to nothing, inside the opening 20 seconds.

It wasn’t long before the visitors had some frantic defending to do, though, as Darragh Burns and Billy King carved them open down the inside-right channel with Ethan Boyle having to hack clear just yards from his goal line as Doyle lurked.

Mark McGinley then made a superb save on nine minutes to palm away McCormack’s drive after King picked him out in a pocket of space in the box.

Joe Redmond and Burns put right-back James Abankwah free on the right to cross with Boyle again defending well with a telling block on McCormack’s shot.

St Pat’s maintained the pressure; McGinley parrying Burns’ shot with Doyle looking set to score from the rebound only to shoot wide.

Fortune smiled on McGinley just past the half hour mark when Burns’ cross from McCormack’s deep diagonal ball struck the Harps’ keeper, hit a post and came back to him.

Minutes later McGinley got down well to divert Doyle’s scuffed shot out for Saints’ third corner of the game.

The intense pressure finally told on the Harps goal on 38 minutes.

The lively King found space on the left to dink over a cross for Doyle whose downward header found the bottom corner to finally beat McGinley. 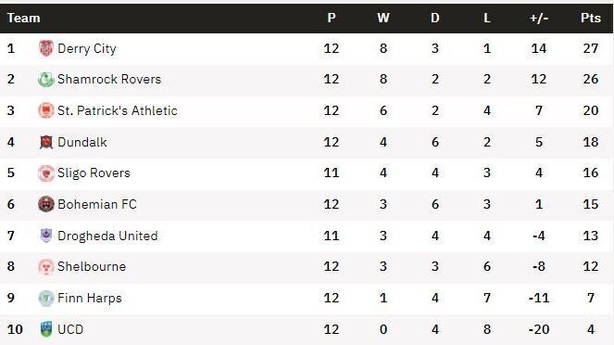 Harps worked the first chance of the second half. Tenacity from Filip Mihaljevic found substitute Mark Timlin, whose shot was parried by Joseph Anang.

Saints soon rediscovered their first-half groove though, McCormack bringing a fine save from McGinley before they doubled their lead on 58 minutes.

Boyle pulled Redmond to the ground at the back post from Burns’ corner and referee Adriano Reale pointed to the spot.

Doyle, who had a penalty saved at UCD on Monday, made no mistake here, sending McGinley the wrong way from 12 yards to double his goals tally to four for the season.

Harps didn’t lie down and rallied late on putting the home side under their first real spell of pressure in the game.

Anang was forced into a good save from Yoyo Mahdy while the substitute then shot over the crossbar when he might have found the target.

The action finished at the other end, though, as Doyle was inches from his hat-trick in the final minute, curling his shot just past a post.