Richarlison grabbed a crucial added-time equaliser against Leicester to give Everton a much-needed boost in their battle to avoid relegation.

An eighth home league defeat looked on the cards after conceding a fifth-minute goal to Harvey Barnes.

But in the second of five minutes of additional time the Brazil international, who had already missed two much easier chances, forced home a shot to make it 1-1.

It was a goal which could yet have greater significance in their bid to avoid the drop as it extended the gap over 18th-placed Burnley to four points.

However, it may not be enough to stop them falling into the bottom three this weekend as by the time they arrive at Anfield on Sunday afternoon for the Merseyside derby against a red-hot Liverpool side they could be two points adrift of safety as Burnley have home games against Southampton on Thursday and then Wolves.

While the draw was frustrating for Leicester, whose understrength side lost at Newcastle at the weekend, a point did little for their league position as they remain in ninth, with their priority now being the Europa Conference League semi-final against Roma. Everton centre-back Yerry Mina was thrust straight back into the team with a first appearance since early February after finally recovering from a thigh injury but striker Dominic Calvert-Lewin was absent having been ruled out for at least 10 days with a quadricep problem.

The Colombia international's first real interaction was to inadvertently deflect Kelechi Iheanacho's shot from James Maddison's cut-back into the path of Barnes who could not miss from close range.

That was just after five minutes but Everton would probably have been behind after just 21 seconds had Seamus Coleman's last-ditch tackle not denied Kiernan Dewsbury-Hall who was through on goal.

Even at kick-off, the atmosphere was not what would have been expected for a night game at Goodison Park and the goal just flattened it further.

Maddison should probably have doubled Leicester's lead after driving from deep and offloading to collect Iheanacho's lay-off but his weak shot was straight at Jordan Pickford.

Everton were dropping so deep in a 4-5-1 it allowed the visitors virtually all the possession in the middle third but the game plan appeared to be to sit it out and then break when the chance arose.

The problem was Richarlison, as the central striker, was so far detached from the rest of the team there was little chance of springing a quick riposte. But the Brazil international did not help himself when unmarked as he bundled wide Anthony Gordon's cross from five yards.

Alex Iwobi started to produce more runs from deep but it took a Fabian Delph tackle on Barnes out on the touchline, one of the few the hosts had landed on their opponents, to lift the crowd.

And when Gordon did break free on the right his cross sailed out of play on the far side, while a Richarlison header and Demarai Gray shot were both off target as Everton tried to fashion a response.

The problem they had was Maddison and Dewsbury-Hall were seeing so much of the ball on Leicester's flanks Frank Lampard's side had little control over the direction of the game.

With almost an hour gone, and Everton having roused themselves after the break, Lampard opted for a more attacking approach by replacing defensive midfielder Allan with Dele Alli in a switch to a 4-1-4-1 formation.

Salomon Rondon's introduction then gave the home side someone to aim at and his first knockdown produced their first shot on target - in the 68th minute - when Kasper Schmeichel saved from Richarlison.

But Leicester, particularly Maddison, still posed their own threat as Pickford punched clear his fierce drive.

On the touchline Lampard was urging calm but his players had adopted a more open approach, which at times meant a five attacking and five defending. 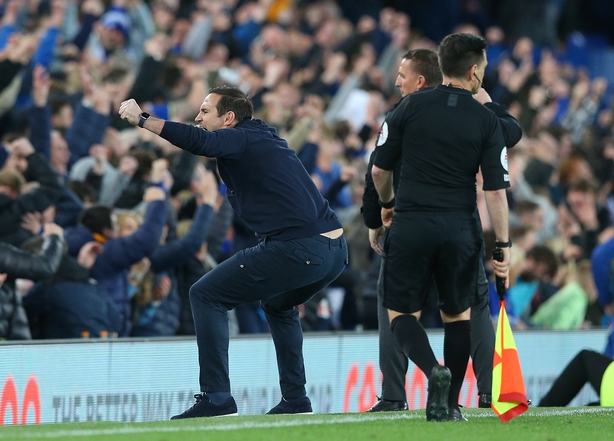 It led to Richarlison missing another chance from six yards out, this time a header from a set-piece, and Rondon flashing a header wide and the chance seemed to have gone until the Brazilian finally hit the target to completely alter the mood.

But with matches to come against Liverpool, Chelsea and Leicester again before the crucial trip to Watford on 11 May safety still remains far from assured.