Teenager Ben McCormack scored and provided an assist for Joe Redmond's late, late winner as lacklustre St Patrick’s Athletic had to come from behind to earn a first win in five games at the UCD Bowl.

The result was harsh on the Students who remain rooted to the foot of the table without a win in 11 games.

Defender Redmond struck with just a minute of normal time to play, shooting to the net from McCormack’s corner.

Collie Whelan had fired UCD ahead on 70 minutes before McCormack levelled, shooting home the rebound after Kian Moore had saved Eoin Doyle’s penalty.

Both sides made five changes from defeats to Drogheda and Shamrock Rovers respectively on Friday.

The stand outs being UCD winger Liam Kerrigan along with Saints' striker Eoin Doyle dropping to the bench.

Despite owning the ball from the kick-off, Saints struggled pitifully to trouble UCD in the final third.

And it was College who carved the first half chance of the game 16 minutes.

Redmond defended well to block Whelan’s shot after Eoin Farrell got free on the right to cross.

Despite continuing to dominate possession, and winning five corners, the visitors’ trooped off at the break without having worked Students’ 19-year-old goalkeeper Moore on his debut.

The only time the UCD defence looked worried came a minute before the interval when Tunde Owolabi’s header from skipper Ian Bermingham’s cross dropped wide of the far post.

St Pat’s had a little more urgency about them into the second half, UCD having to defend frantically from a Bermingham cross with shots from Owolabi and Darragh Burns in turn blocked before Moore gathered.

Owolabi then powered a header over the top from a Jay McClelland cross on the hour as St Pat’s upped the tempo.

Though Saints introduced Eoin Doyle and Billy King midway through the second half, it was UCD who finally sparked the game to life on 70 minutes with the lead goal.

The lively Whelan found a pocket of space to pick out Dylan Duffy.

The winger’s low drive was merely parried by Joseph Anang allowing Whelan to sprint in to drive home the rebound for his second goal of the season.

The lead lasted just five minutes though, as McCormack won a penalty when fouled by fellow substitute Kerrigan. 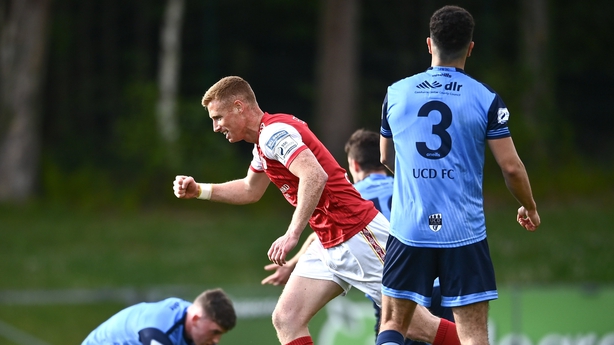 And though Moore went the right way to parry Eoin Doyle's spot kick with his legs, McCormack drilled home the loose ball.

Saints pressed for a winner, King’s deflected shot rattling the crossbar before Redmond won it in the 89th minute.