Pep Guardiola had no regrets over his selection after Manchester City's treble bid ended with defeat to rivals Liverpool in the FA Cup semi-finals.

City boss Guardiola saw his side go down 3-2 at Wembley after making seven changes from the team that came through a bruising Champions League clash at Atletico Madrid in midweek.

One of those changes saw second-choice goalkeeper Zack Steffen come in for Ederson and the American made a poor mistake to gift a goal to Sadio Mane after Ibrahima Konate had given Liverpool an early lead.

With Mane volleying in a second on the stroke of half-time, City were 3-0 down at the interval and staring at a heavy defeat.

Guardiola, however, defended his players and was pleased with their response in the second half.

The Spaniard said: "I have a lot of confidence in my players and selections. I trust a lot of them. We had a terrible run of fixtures and travel and a lot of important games. That's why we needed fresh legs.

"We started well but after one set-piece, where Liverpool are so strong, and the second was an accident, it was tough. Then we conceded a third in the last minute of the first half.

"In the first half we were so passive, we were scared to support people when we went there, but in the second half we had the momentum, we had the most clear chances." 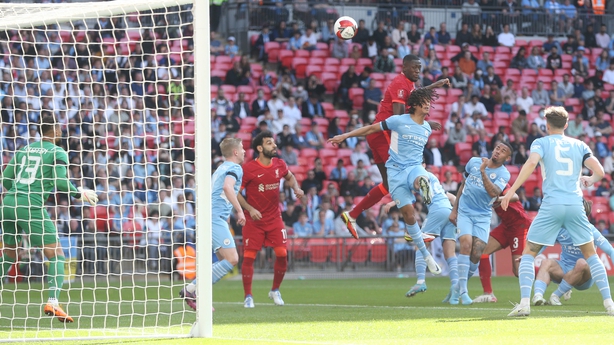 Guardiola was particularly supportive of Steffen, who dwelt too long on a backpass from Nathan Ake and lost control, allowing Mane to slide in and score.

He said: "It's an accident, it happens. Edi (Ederson) was close (to making a similar mistake) in the last game (against Liverpool) as well. We need that to create our football. Mane was quicker and that's all.

"I'm pretty sure Zack didn't want to do it. Sometimes strikers miss chances in front of keepers, but keepers are punished more."

Guardiola said he was limited in his selection choices by injuries, with substitutes Kevin De Bruyne and Ilkay Gundogan remaining on the bench due to knocks and Kyle Walker not being involved at all.

He has little time to dwell on the matter with the leaders' attention turning back to their Premier League title challenge with Wednesday's visit of Brighton.

Guardiola said: "When you play a lot of games and you don't have that big a squad - when everybody is fit it's OK but when we have a few injuries it is not enough.

"We can rotate some players but we know when we arrive at this stage of the season and you are fighting for the titles there is no time to rest."