Galway United joined Cork City on 20 points at the head of the Airtricity League First Division table after a 1-0 win over Waterford FC at the RSC.

Manu Dimas got the only goal of the game on 15 minutes. In truth John Caulfields's side should have been ahead earlier after Stephen Walsh put a free-header wide on eight minutes.

Intricate passing from the visitors was the precursor to the only goal; the ball eventually finding Alex Murphy and his curling effort across the face of the goal was met my Dimas, who turned it in.

Waterford's best chance of the opening half came via a Shane Griffin free-kick, which forced Galway keeper Conor Kearns to get down low and save. Stephen Walsh had a chance to double Galway's lead just before the break but he fumbled an inviting cross. 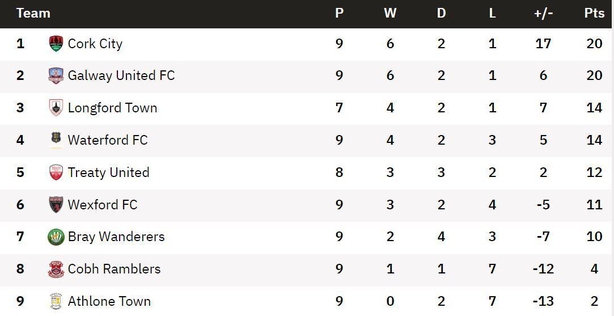 Further chances went abegging in the second period, with Cian Kavanagh heading just over for the hosts. Sub Louis Britton saw his effort smash off the cross-bar as the Blues piled on the pressure - Killian Cantwell's effort on the rebound also hit the woodwork.

The westerners held out for a hard-earned three points.

At Turner's Cross, Cork City could not break the deadlock in a 0-0 draw against Bray Wanderers. Elsewhere, Wexford FC defeated Cobh Ramblers 4-2 and Athlone Town shared the spoils in a 1-1 draw.