It was a very Good Friday for Dundalk as first half goals from Patrick Hoban and Daniel Kelly saw them move up to third place in the table with just their third win of the season against Sligo Rovers at Oriel Park.

Stephen O'Donnell’s side had to overcome a late scare when Max Mata pulled a goal back from Paddy Kirk’s long throw with three minutes to go but were full value for their win in the end.

The result piles the pressure on Liam Buckley’s side who are now without a win in their last five matches.

While Dundalk are still a work in progress, their difficult to beat nature has them very much in the mix for Europe.

It was nevertheless a costly victory for the Louth men with both Robbie Benson and Dan Williams limping off with injuries that threaten to rule them out of Easter Monday’s trip to face Shamrock Rovers at Tallaght Stadium.

After a couple of half chances for the visitors in the early stages, it was Dundalk who fashioned the first serious opening of the game on five minutes when Hoban slipped Steven Bradley in on goal but the young Scot was denied by a fine stop from Ed McGinty, who was quick off his line.

Aidan Keena then had a half chance five minutes later after Andy Boyle's clearance came off his colleague Mark Connolly but his effort was straight at Nathan Shepperd.

Kelly then flicked a header wide from Sloggett’s cross a minute later before Shepperd came to Dundalk’s rescue once again on 13 minutes with a super save at point blank range to deny Max Mata after Karl O’Sullivan’s shot had broke to him inside the box. 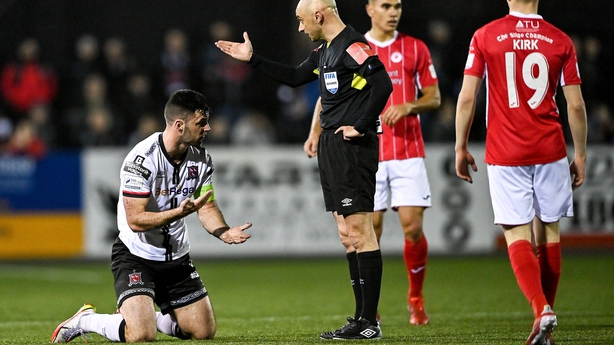 Keena then had another half chance on 16 minutes when he beat Shepperd and Connolly to Will Fitzgerald’s knock down but he his effort under pressure was high and wide.

Kelly then had another good chance two minutes later after being teed up by Sloggett at the edge of the box but his effort was straight at McGinty, who gathered at the second attempt.

The breakthrough then arrived on 34 minutes with Hoban tapping home at the back post after McGinty could only flap at Bradley’s cross from the right.

The goalkeeper did deny Sloggett shortly after but he was powerless to prevent Kelly from doubling Dundalk’s advantage on 43 minutes after he had been slipped in by Bradley.

Sligo rang the changes at half-time with Niall Morahan and David Cawley introduced but despite two efforts from the latter - one of which was off target and the other straight at the goalkeeper - the visitors struggled to find a way back into the game.

The home side were well in control and were unlucky not to add to their advantage when birthday boy Darragh Leahy forced a good save from McGinty with a header from Bradley’s cross before Hoban and Bradley both forced good stops in quick succession from the keeper.

Sligo did set up a nervous finish when Mata flicked Kirk’s long throw to the top right hand corner on 87 minutes but their best chance at a leveller was blazed over by Kirk in stoppage time. 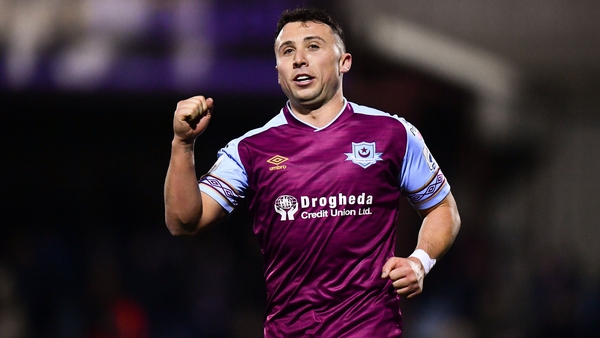