Arsenal manager Mikel Arteta has offered no assurances that Thomas Partey will play again this season after suffering a "significant" thigh injury.

The Ghana midfielder was injured during Monday's 3-0 Premier League defeat at Crystal Palace, with Kieran Tierney missing the game at Selhurst Park due to a knee issue.

Tierney has since undergone surgery and is expected to be missing for the run-in as Arsenal aim to recover with victory over Brighton on Saturday.

But their quest for a top-four finish has been dented further with Partey's latest setback - and Arteta admits it could keep the former Atletico Madrid man on the sidelines for some time.

"It is a little bit ambiguous but he has a significant injury and we'll have to keep assessing him but he will be out for some weeks," he said.

Asked if Partey could play again this campaign, Arteta added: "It could be but it could not be the case - because it is an area where he had a previous injury as well and he felt it straight away and he is not fit."

Tierney went under the knife after picking up a knee injury while on international duty with Scotland - with Arteta casting doubt on whether the left-back will return in time to feature in their World Cup play-off fixture with Ukraine in June.

"I don't know yet, he just had a surgery yesterday," added the Spaniard.

"So it is very early to understand how everything is going to develop, he's going to be out for the period that we estimate but to know what condition he will be after that period, I think it's too soon to to be able to say something.

"I think the player has to do the maximum that he can to be in the best possible condition as quick as possible.

"I'm sure Kieran will do that and once he's there, let's see if he's able to compete and with what kind of risk or not but I'm sure he will do that.

"Our responsibility is to look after them when we have them here.

"Once they go to a national team in this cases it is the job and responsibility of Steve Clarke to decide a team that he believes is the best to win games and we have to try to have good communications with national teams, which we have, but these things happen.

"We lost two big players, really important players for us in the team for sure.

"So we have to find other solutions and we have to still be as good and as competitive as we have been."

Arteta has been operating with a tight-knit first-team squad, with only 12 players featuring for over 141 minutes since 1 January.

Partey and Tierney are among that group and will have to now be replaced, with Nuno Tavares struggling at Palace after being called in at left-back.

The summer signing from Benfica lasted just 36 minutes of the FA Cup third round defeat at Nottingham Forest in January and was hauled off at half-time on Monday night.

"Obviously I speak with the players and I spoke with Nuno because I care a lot how they feel and we are here to help them, and make their careers better," Arteta said.

"Now he needs to react on that situation, because it is a great opportunity to learn a lot in that period in your career." 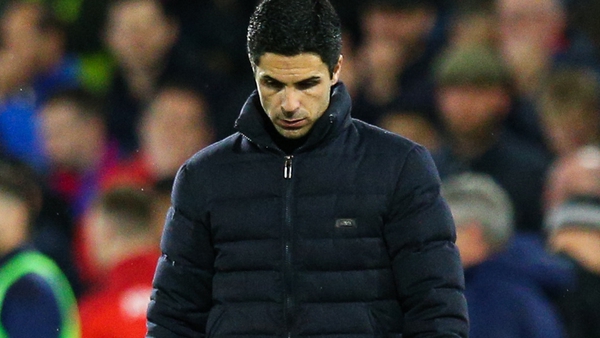