Giovanni van Bronckhorst remained defiant but realistic after Rangers' 2-1 defeat by Celtic at Ibrox took the Hoops six points clear at the top of the Scottish Premiership.

Midfielder Aaron Ramsey put the home side ahead in the third minute but Parkhead midfielder Tom Rogic levelled four minutes later before defender Cameron Carter-Vickers fired in the winner just before the break.

With six fixtures remaining - including another Old Firm game at Parkhead - the Hoops are also 16 goals better off than Rangers and in the box seat to wrest the title back from Govan.

The Gers boss, who now starts preparing for the Europa League quarter-final first-leg tie against Braga in Portugal on Thursday, said: "Well, losing today against Celtic made it more difficult for us.

"That is obvious. It is not over yet but of course, the loss we had today makes it more difficult to be champions.

"If you play against your direct opponent for the race and you lose, you always make it more difficult.

"We have to keep on going. The emotions in football are highs and lows.

"Any football player will feel that, the days when you are very disappointed in the result.

"But there is still a lot to play for. Take this loss and disappointment, recover and be ready again on Thursday for Braga. It's another big game and we have to prepare well.

"It's almost the end of the season with a lot of games to be played in a lot of competitions. So we have to prepare and that's all we will do."

Asked about the decision to replace Ramsey with Fashion Sakala in the 66th minute, with Scott Arfield also on for Ryan Jack, Van Bronckhorst said: "Well I made my decision, that's it.

"Of course it's easy to talk about subs and why it didn't happen.

"You bring in fresh legs. We put Sakala on the wing to get more bodies up front and to play with a lot of pressure up front.

"If you lose, the subs are always bad. If you win, it's always good. I've had both moments in this season so far.

"It's the task of a coach and also if it doesn't go well then it's always the blame of the coach. I have tough skin."

The Dutchman refused to blame the absence of striker Alfredo Morelos - ruled out during the week with a muscle injury - for the defeat.

He said: "It was just the way we had to handle it. He wasn't here. I don't want to find any excuses.

"I don't want to find excuses, I just want to play as good as we can with the players we have available.

"That is my job and that is my task. Of course we are very disappointed that he is not here, that is a different story.

"Of course we want Morelos to be involved but he isn't and that is a fact." 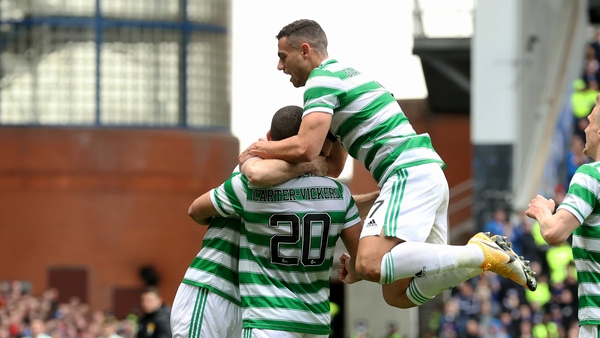 Celtic edge closer to title after victory over Rangers at Ibrox