Gianni Infantino has stepped sharply back from hotly contested plans for a biennial World Cup, telling world football's leadership that FIFA had never proposed such an idea.

The FIFA president has been under fire for the past year, particularly in Europe, for proposals to increase the frequency of the global extravaganza from every four years, to every two.

But at FIFA's congress in Qatar on Thursday, Infantino told assembled heads of world football that the sport’s governing body had not been proposing the move which was threatening to split the football world.

"Let me be very clear that FIFA has not proposed a biennial process," Infantino said. "The last FIFA congress passed to the administration a vote, with 88% voted in favour, to study the feasibility of the World Cup every two years.

"FIFA administration, under the leadership of [former Arsenal manager] Arsene Wenger, then started a feasibility... FIFA did not propose it. It concluded that it is feasible, that it would have some repercussions and impacts."

Infantino said a phase of consultation and discussion would now take place.

"It is the phase to find the grievance and to find the compromises. So, looking at the leagues, the clubs and the players... we'll try to have a debate and a discussion to find what is most suitable for everyone. Because everyone has to benefit.

"Positive or negative or neutral, every feedback is what is important in this discussion, and I'm proud that national team football is back on the agenda." 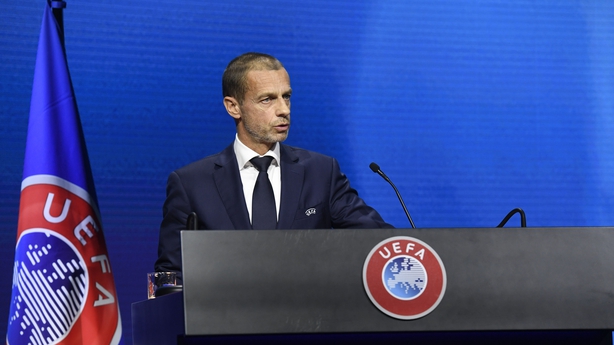 European football's president Aleksander Ceferin [above], who earlier called for a pan-European boycott of such an event, said earlier this month that a biennial World Cup was simply a "no go for everyone in football."

The idea had been gathering steam with Infantino seeking support from national federations, saying the move would create an extra $4.4bn [€4bn] in revenues for the world body.

A report compiled by KPMG and FTI's Delta Partners, showed the plan, and resulting changes to the Club World Cup, could cost the big domestic soccer leagues and UEFA around €8bn per season in lost TV rights and match day and commercial agreements.

The report, commissioned by the MLS, Mexico, Japan and South African leagues as well as the European big five, said even the least disruptive options would cost them billions annually.

The biggest hit would be to TV revenues. It calculated that the 40 biggest domestic leagues around the world and UEFA club competitions like the Champions League stood to lose as much as €5bn per season in audiovisual deals alone - more than a third of what the leagues make in TV rights today.

A February poll of 1,000 professional footballers, organised by global players' union FIFPRO, showed that three-quarters of them wanted to keep the tournament every four years.