A late stoppage time goal from Troy Parrott earned the Republic of Ireland a 1-0 friendly victory over Lithuania at the Aviva Stadium. Here's how we rated the players...

Didn't have a shot to save on a night when he was as much a spectator as the near-35,000 crowd. Punched one corner kick away from danger towards the end of the first half but, other than that, had to maintain concentration and communication with his defence. Also dealt admirably with a pitch invader who sprinted his way and posed for a selfie.

Started on the right side of the back three and was the one who seemed to be given most licence to break forward and try and disrupt the defensive shape which the visitors slotted into from the off. An indication of this was when the Burnley man was caught offside on one occasion in the first half when he made a run off the last man. That same threat didn’t seem to be there after the break. 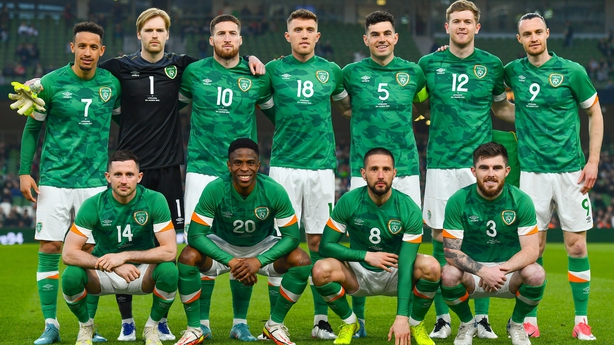 If you are being really picky about the Sheffield United man’s display, it was that there were a couple of occasions when he was given calls to control balls coming at him in the air but chose to head away. Didn’t have to be anywhere near as aggressive with his interceptions as he was against Belgium. Had a late header comfortably saved.

A welcome return for the West Brom defender following his ankle injury. Had been making the right-sided spot his own in the back three and now finds himself down the pecking order slightly. Not tested defensively and was replaced just after the hour as Ireland changed personnel to try and find a different way to make the breakthrough.

Drifted inside from the right and also went down the outside to try and mix up his play. Almost paid off in the 57th minute when the space opened up in front of him and he could drive into the box, was lucky with a deflection that kept the ball in his path but saw his low shot well saved. Was by far the most positive in a green jersey but did take a wild swing at a shot after making another good opening for himself.

Looked the most lively and efficient from the first whistle in the opening 45 minutes and almost had an assist to his name when his cross was turned in by Chiedozie Ogbene, only for it to be disallowed by the linesman’s flag. Switched from wing back to left side centre back just after the hour.

Buzzed about to try and get Ireland moving but, like his midfield partner, that bit of class to break the lines with a ball into the final third wasn't evident on the night. Seems his best moments in an Ireland jersey have come making runs into the box but he needed to be more patient in possession here. Almost connected with a header similar to his goal against Belgium at the weekend but was a rare foray into the box to offer some form of disruption to the norm.

Split open the Lithuanian low block defensive shape superbly for Manning towards the end of the first half but was a rare piece of ingenuity in the middle of the park after patient build up. Set pieces lacked conviction, too. A clean strike was rightly disallowed for offside after the break and Ireland toiled after that.

Thought he had continued another dream week for his country when he tapped home at the near post in the first half. The offside flag brought a premature end to celebrations.

Unable to utilise pace in behind considering how deep the visitors’ defence started from. Did link well down the right with Doherty on a couple of occasions but same spark from the weekend was missing and had the double whammy of a second goal being disallowed.

Constantly on the move, either by giving an option to feet or attempting to drift in behind. Glanced one header over the bar after making too strong a connection, and tried to get on the end of a couple of cross to no avail. No goal on his full debut before being replaced by Troy Parrott in the 63rd minute.

Seemed to get frustrated early on in the first half and some wild shots from distance which only troubled fans behind the goal were an example of this. There were moments of neat link up play, one flick for Ogbene in the second half stands out when the latter thought he should have had a penalty. But Robinson wasn’t able to find the key to unlock a stubborn defence.

Just delayed his pass for James McClean a fraction too late in the build up to the third disallowed goal, and then had a fine shot superbly saved in injury time before winning the game with an absolute stunner of a shot from distance.

Offered a constant threat down the left and did well to keep the move going in the build up to the goal.

Got in on the act with the fourth disallowed goal.

Combined really well with McClean to keep Ireland attacking for the goal.