Ireland twice came from behind to draw 2-2 with Belgium in Saturday's international friendly. Here's how we rated the players...

With Gavin Bazunu forced to withdraw and return to his club, Portsmouth, the Liverpool No 2 had the first of two opportunities over this friendly double header to lay a marker of his own down. Maybe didn't quite read the quick shot of Michy Batshuayi quick enough, but the finish was sublime and he was desperately unluck for the deflected second goal. Made one commanding claim in the second half which showed he’s more than just good with his feet.

Came into this international break on the back of a torrid time at club level, with his performances for relegation-threatened Everton coming under scrutiny. The Ireland skipper is well beyond the point of needing to prove anything once he pulls on the green jersey, and he’ll know he should have stopped Batshuayi getting the yard of space needed to get his shot away. But he never wilted after, his aggressive closing down early in the second half creating the chance which Callum Robinson had cleared off the line. Unfortunate with the deflection from the corner which gave Belgium their second. 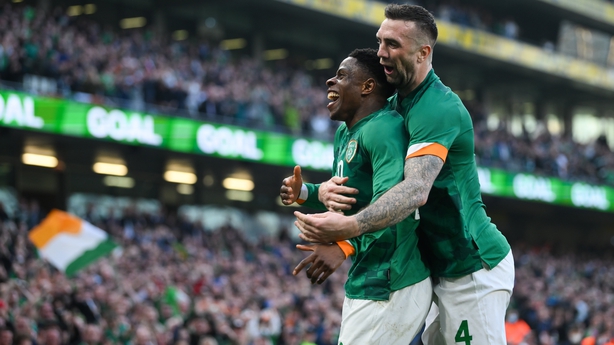 Had to be constantly alert as to where the threat was coming from, be it Batshuayi drifting wide or in front, or Vanaken and Alexis Saelemakers taking turns drifting in to a typical No 10 position. Did well to keep the move alive at the back post which led to the equaliser in the first half. Didn’t allow Batshuayi to dictate their duel, although he might just wonder it was necessary to retreat near the penalty spot to block the striker’s shot which led to the corner that Belgium got their second.

Same challenge as Duffy and Coleman, and it seemed as if an early tactic of trying to be aggressive and nick balls into feet in front of his men stalled once the visitors took control in that first half. But in the build-up to the first equaliser that changed and his aggressiveness kept Ireland on the front foot. A couple of switches of play didn’t come off but all in all his passing seemed pretty effective. Questions will be asked among that defence about what happened for Vanaken’s header, however. 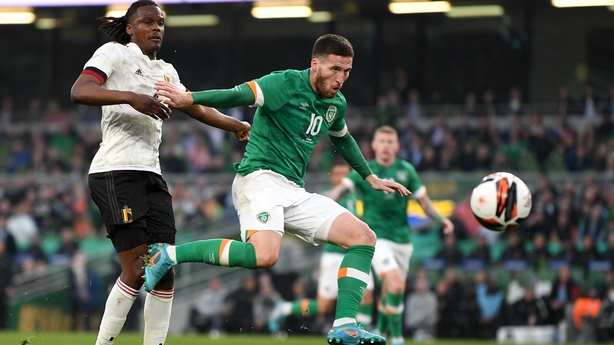 Thorgan Hazard gave him plenty to contend with down his flank, and was needed to tuck in as a right-back when the Belgians pinned Ireland in their own half. Played a key role in both of Ireland’s goals, though. For the first, he had the pace to keep the ball in and put in a good cross to maintain pressure. For the second, with just five minutes of normal time, he had the speed of thought and willingness to nip in and steal possession and get Ireland back on the attack.

Caught napping early in first half when a sharp combination of passing between Saelemakers and Vanaken led to the former bursting into a dangerous position. He squared for Batshuayi whose shot was deflected over. It was a warning, but he made sure to support the attack in the build-up to Chiedozie Ogebene’s first-half goal. Waned after the break and couldn’t offer much going forward before being replaced with ten minutes to go.

Exposed badly at times, the opening goal a case in point as Belgium gained control of a loose ball. Slowly built up a head of steam, however, and he produced one world-class piece of play in the 49th minute. After playing a neat give and go with Doherty near his own box, the Dubliner then strode through the middle of the pitch and, while on the run, produced a sensation curled pass that took out Belgium’s entire defence and sent Jason Knight through. The chance was unfortunately squandered.

After a string of really impressive performances, in which he has made the centre midfield spot his own, the Anderlecht man didn’t really get going here. Was caught in possession on a couple of occasions, misplaced the kind of passes that stuck in the mind, and generally just didn’t seem at the right pace. Lost out on some breaking balls, too, but his head never dropped as Ireland pressed for an equaliser and that character, to keep showing for the ball, is admirable. 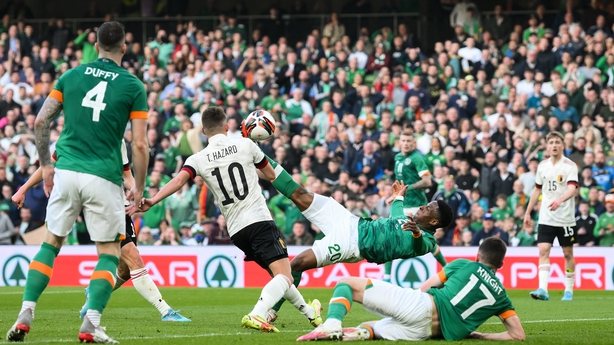 His equalising goal was of the highest class. The awareness to take a touch, the technique to adjust his body, and the quality to put it all together for a sublime overhead was sublime. Led the line with selfless running, showed to feet too and when his stamina was needed most, the Cork man delivered again, keeping Doherty’s pass in play and delivering a perfect cross for Alan Browne to earn a draw.

No goal for Ireland’s CR7 but his all-round forward play gave the Belgium defence constant problems. Ogbene’s goals was a case in point. The West Brom forward started the move on the right side, clipping a pass to Doherty, then followed the ball to the centre, keeping the cross alive before ending up on the left to deliver a deft ball to the back. It was 15 seconds of constant movement, and it paid off.

Tasked with pressing high from the left side as well as dropping back quickly to help the midfield two of Cullen and Hendrick. Nervous start and was high energy throughout, but he didn’t have the kind of impact he would have been hoping for. Hendrick fed a glorious through pass for him but his hesitancy on his left side, attempting to cut in on his favoured right, allowed the opportunity to pass by. 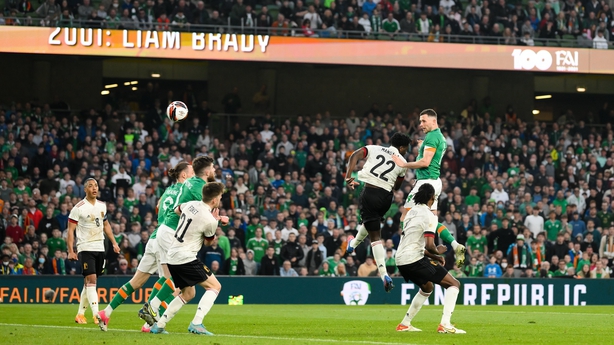 Took his chance off the bench and connected brilliantly with his header from Ogbene’s cross. In contention for a start on Tuesday against Lithuania.

One clever run off the last man led to shouts for a penalty but would have been soft. 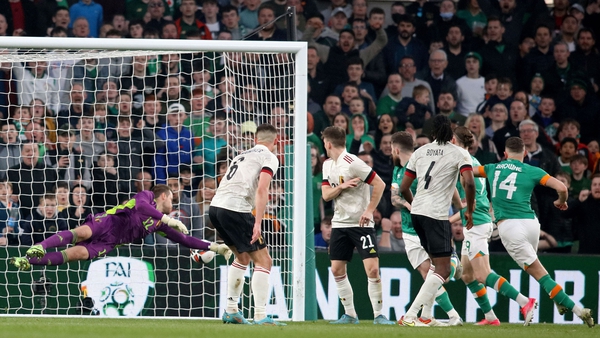