Sligo Rovers got their first ever Women's National win in a hard-fought 2-1 victory against Cork City at Turner's Cross.

The game was just passed the hour mark when Gemma McGuinness made history by scoring the first league goal for Sligo, and the lead was doubled by Emma Doherty who made a huge impact in the game.

Nadine Seward got one back for Cork, but it was a famous win for the Bit O'Red, encapsulated by a super performance from Kristen Sample.

Wexford Youths eased to a 3-0 win at Bohemians.

The game will be remembered for yet another super strike by the Republic of Ireland's young sensation Ellen Molloy.

The teenager opened the scoring with a thunderbolt from just inside the attacking half early in the game. Ciara Rossiter doubled the lead by scoring directly from a corner.

Wexford controlled the game and the ever reliable Kylie Murphy tapped in a third midway through the second half. 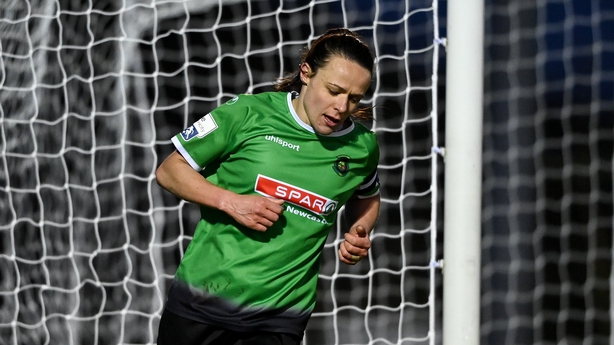 Peamount United hammered Treaty United 5-1 to go two points clear at the top of the table.

They started things early with goals from Aine O'Gorman [above], Stephanie Roche, and Jetta Berrill. Sadbh Doyle added another late in the first half to effectively seal the win.

Things slowed down in the second period with Treaty finding themselves mostly defending.

A bright spark for the Limerick side was Emma Costello, who got one back for Treaty with a finish into the top corner.

Peamount's quality and experience showed however. Jetta Berrill added a fifth to put a gloss on the scoreline.

Galway played out a 1-1 draw with DLR Waves at Eamonn Deacy Park.

DLR Waves had the better chances in the first half and would take the lead coming up to the break. Avril Brierley found Sarah McKevitt in the box and she finished tidily to add a goal to her four assists so far this season.

The game was interrupted as Ireland and Galway defender Savannah McCarthy had to be stretchered off.

Galway would find an equaliser in injury time in the first half. A lovely bit of skill from Aoibheann Costelloe led to Lynsey McKey sending a cross into the Waves box where Aoife Thompson headed home.

The second half was back and forth with both sides having chances.

Galway claim close to snatching a winner in the 84th minute with a goal mouth scramble but ultimately the spoils were shared.

Shelbourne's know-how showed as they battled past a resilient Athlone Town to win 2-0.

The Reds found a way through in the 28th minute with some direct attacking play which ended with West Ham-bound Jess Ziu squaring the ball to Noelle Murray who tapped in.

Athlone held out well in the second half and had a few chances on the counter-attack, but it was Shelbourne who spent most of the game on top. Keeva Keenan scored late on to seal the win.