Ange Postecoglou believes Celtic delivered a "statement" 4-0 win over 10-man Ross County that boosted them six points clear of Rangers at the top of the cinch Premiership.

Giorgos Giakoumakis scored the first two goals of a successive Parkhead hat-trick with fellow attacker Daizen Maeda also on the score sheet before Staggies defender Kayne Ramsay was shown a straight red for a foul on Tom Rogic, and all this with just 28 minutes gone.

Giakoumakis scored with a penalty on the hour mark - he scored three against Dundee in his last Celtic Park appearance last month - as the Hoops heaped pressure on Rangers who face bottom side Dundee on Sunday.

Celtic, unbeaten in the league since a 1-0 defeat at Livingston in September, are showing no signs of letting up with seven league games remaining and they face a trip to Ibrox after the international break.

The Hoops boss, who described Rogic's injury which forced him off as "not too bad" said: "I don't think our players had lost ruthlessness but it's very easy to succumb to anxiety at this time of the year when the stakes are so high.

"It's important that we keep playing our football and not shy away from that.

"That's why it was important not just to win the game but to make a statement about playing our football against a side that has been in great form.

"We went in determined to set the tempo and pace of the game.

"We started the game really brightly, I thought our football was really good today."

On another hat-trick for Giakoumakis, who took his tally for the season to 12, he said: "I thought him and Daizen were outstanding again in their press today and Jota was good with the ball.

"The front three got opportunities to score and assist, but they know they have to work hard for that. That is why they are getting their rewards."

Asked if he would watch the Rangers game on Sunday, Postecoglou said: "My Sundays are dictated by my wife and kids mate.

"If Sing 2 (computer-animated jukebox musical comedy) is on, I'll have to fight for the remote control.

"I get why people are focusing on that and asking the question.

"I don't worry about things I can't control, what we could control was today.

"If we got three points today, why would we even bother about looking at anything else?"

County boss Malky Mackay feared a bigger mauling when his side went down to 10 men.

The former Celtic defender said: "It doesn't make it any easier when you go down to 10 men after 30 minutes.

"You are looking at damage limitation at that point so I was delighted with the resilience of the team because that could have been seven or eight.

"It has been before with teams here, to play for 60 minutes with 10 men and keep it fairly reasonable from that point is OK."

On the sending-off, Mackay said: "His right foot comes through and takes the ball, I didn't think there was a tackle on that foot.

"His momentum coming through sees his left foot come off the ground and that gives the referee the sending-off.

"Letter of the law you could say his feet are off the ground but I don't think there was any malice in it.

"At that point the crowd are shouting the referee gives it. Could it have been a yellow? Yeah, maybe.

"I asked the referee if he was sure. He said the two feet were up off the ground. It's one of those things, we get on with it." 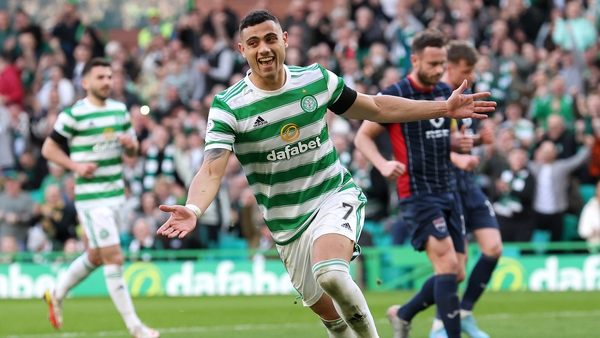