Cork City secured their second win of the SSE Airtricity League First Division season as they cruised to a 2-0 win against Cobh Ramblers in the Cork Derby.

Goals in each half from Ally Gilchrist and Cian Murphy were enough to earn City the three points while for Ramblers, they now only have one point to show from their opening three matches.

City dominated the match from the first whistle but it wasn’t until the 14th minute that they created their first genuine opportunity, which resulted in the first goal of the evening.

Centre-back Gilchrist did well to break free from his marker at a corner before sending his diving header past the goalkeeper from a few yards out for his first goal for the Rebels.

It remained one-way traffic after the deadlock had been broken as the home side began to play lovely some quick, incisive football, clearly buoyed as their two-game streak without scoring a goal had come to an end.

City ought to have doubled their lead midway through the first half but after Murphy pressed and reclaimed possession on the end-line his pullback, which was dummied cleverly by the alert Ruairí Keating, was sent bobbling wide of the far bottom left corner by Barry Coffey.

City continued to cause problems from set-pieces as the half-time break approached but Murphy headed wide of the far post, while Cian Bargary saw a low drive saved by the feet of goalkeeper Andy O’Donoghue after the ball broke kindly to him.

Coffey did beat the visiting shot-stopper on 36 minutes but his fierce drive, which looked certain to find the top left corner, was nodded off the line by the defender Issa Kargbo.

Cobh created nothing in the first half but they posed a threat at the beginning of the second and Beineón O’Brien Whitmarsh twice went close to netting against his former employers but after seeing a header easily saved, he saw his next shot from a good position deflect over.

Those missed chances proved costly for the Rams as City killed the game as a contest just past the hour mark when Murphy latched onto a loose ball just inside the penalty area before sliding it past the keeper.

They controlled proceedings from that moment on and very little happened as a result as they were content to hang onto their two-goal lead and secure their second win of the campaign. 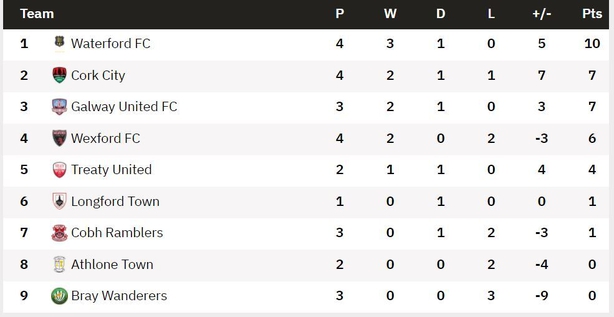 Elsewhere in the First Division, Waterford stayed top of the table with a 2-1 win at home to Wexford.

All the goals came in the first half, Junior Quitirna giving the Blues the lead in just the seventh minute.

Conor Crowley levelled just before the half hour but Phoenix Patterson scored what proved to be the winner in the 34th minute.

Galway United were 3-1 winners over Bray Wanderers at the Carlisle Grounds.

David Hurley broke the deadlock for the visitors in the 53rd minute and Stephen Walsh doubled the lead in the 67th.

Hugh Douglas hit back for Bray two minutes later but Shane Doherty made the points safe for John Caulfield's side in injury-time.