Karim Benzema's sensational second-half treble sent Real Madrid through to the quarter-finals of the Champions League at the expense of Paris St Germain.

The 2020 runners-up looked set for a place in the last eight at half-time with Kylian Mbappe on target again having scored the only goal at Parc des Princes last month.

Fellow Frenchman Benzema stole the show though with a hat-trick after the break and his final two goals were separated by just 106 seconds in a 3-1 win that left Mauricio Pochettino’s men stunned with the pressure now ramped up on the former Tottenham boss.

A knock in training on Monday had briefly put Mbappe’s involvement in the round of 16 second leg in doubt but he was included in the starting XI and tested Thibault Courtois twice during the first quarter of an hour.

Carlo Ancelotti’s side had created chances of their own early on and Benzema forced Gianluigi Donnarumma into a wonderful finger-tip save in the 25th minute.

PSG slowly grabbed the initiative and Lionel Messi almost produced another classic moment against his old rivals but was unable to find the target from a tight angle after a trademark run and one-two with Neymar outside the area.

Mbappe had the ball in the net with 34 minutes played but the offside flag went up after creator Nuno Mendes had strayed offside.

He was not denied five minutes later when a classic PSG counter-attack broke the deadlock.

Leandro Paredes won back possession, Neymar's first-time pass over Eder Militao sent Mbappe away and after David Alaba had been squared up, the 2018 World Cup winner slotted into the bottom corner from 16 yards to silence the Bernabeu.

Two Benzema efforts provided a reminder of Madrid’s quality but PSG thought they had doubled their advantage eight minutes into the second half.

Neymar and Mbappe again combined with the latter producing a step-over that fooled Courtois before he rifled into the empty net but fortunately for the Belgian the offside flag was up.

Militao had stepped up at the perfect time and made an equally crucial tackle on Mbappe minutes before the equaliser arrived via a mistake.

Donnarumma wanted too much time on the ball in the area and was closed down by Benzema, which forced a wayward pass that was snapped up by Vinicius Junior, who picked out Madrid’s top goalscorer for the season and he made no mistake with a close-range finish.

The hosts scented blood and after Vinicius had squandered an excellent opportunity, the 13-time European champions made their next chance count.

Luka Modric was at the heart of it with a stunning run before he exchanged passes with Vinicius and played Benzema through with the France international doing the rest with a low finish via a deflection off Marquinhos.

The erratic display of PSG captain Marquinhos had summed up the visitors’ poor showing after the break but worse was to come for the Brazilian.

Almost immediately from kick-off Madrid won back possession and Vinicius again ran in behind the away side’s back four and although Marquinhos got back to cover, his miscued clearance went straight to the unmarked Benzema.

He drilled home with a first-time effort from 16 yards for his 27th goal of the term to spark huge celebrations at the Bernabeu.

Cynical fouls were the order of the day for the final exchanges in Spain’s capital but there was time for Messi to almost save PSG’s blushes but his stoppage-time free-kick hit the roof of the net. 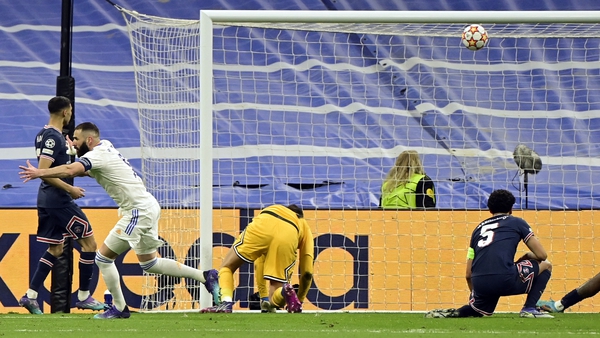