Liverpool trio Thiago Alcantara, Joel Matip and Roberto Firmino have all returned to training ahead of their Champions League last-16 second leg at home to Inter Milan.

Midfielder Alcantara and centre-back Matip will be in the squad after a thigh injury and illness respectively.

A late decision will be taken on Firmino, who has not played since the first meeting with the Italians in mid-February because of a groin injury.

The Merseysiders are in excellent form, with Brazilian Fabinho the perfect embodiment of the current confidence levels within the squad on the one-year anniversary of their last home defeat.

They have not lost at Anfield in 28 subsequent matches - and have beaten only three times anywhere since then - and the first leg of an unprecedented quadruple has already been secured.

In winning the Carabao Cup at Wembley eight days ago Fabinho displayed the sort of impudence which was distinctly lacking last March with a cheeky dinked penalty in a shoot-out they won 11-10.

"The day before, I tried to do a Panenka. It was just me and Luis Diaz, with no goalkeeper in the goal," said the Brazil international ahead of the Champions League last-16 second leg visit of Inter Milan.

"I told him 'tomorrow if it goes to pens, I will shoot it like this'. He didn't believe me but when I was walking to the box to take the penalty, it was in my mind to shoot a Panenka. It worked.

"When you shoot a penalty like this, you know that if you miss, when you come back to the dressing room everyone will kill you.

"But it was in my mind that I would take it like this, and that I could do it."

Liverpool hold a 2-0 lead over Inter from the first leg but Klopp is taking nothing for granted against the Serie A champions.

"They don't come here as tourists, I know that they want to chase the game - that's what we want to do because we are not a team who defends results," he said.

"We want to attack the game again and let's see what we can get from it." 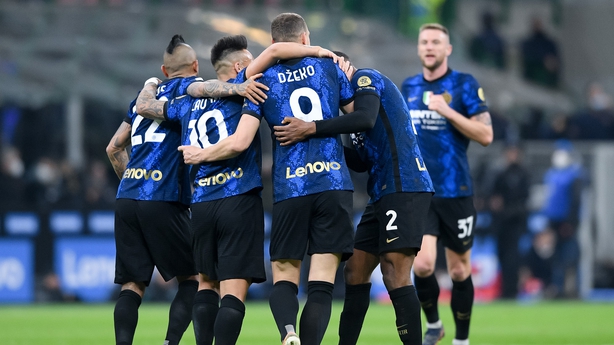 Inter come into the game on the back of a 5-0 victory over Salernitana and coach Simone Inzaghi hopes that will be the confidence-booster they need.

"We have had to use up lots of physical and especially mental energy in recent games, but these kind of games serve as motivation and allow you to have the best possible approach," he said

"The 5-0 win didn't end any crisis as there wasn't one in the first place. We are a solid squad and there are no problems internally and that's what counts.

"We have always been confident in ourselves and the 5-0 win shows we have quality."

Follow Liverpool v Inter Milan on Tuesday via our live blog on RTÉ Sport Online and the RTÉ News app, watch live coverage on RTÉ2 or the RTÉ Player from 7.30pm.