Carter-Vickers lashed home from close range to ease the tension at Parkhead 10 minutes after the break after Celtic had struggled to cut through a well-drilled visiting team.

The opener did not open the floodgates by any means but Celtic's lead was never threatened before McGregor doubled it in the 81st minute when he drilled home from inside the box.

Manager Ange Postecoglou had warned the leaders would face a battle in every game of the run-in with every team in the league playing for something, and St Mirren provided just that.

Ahead of the game, only Celtic had collected more Premiership points than St Mirren in 2022, despite the Buddies playing one less game than most of the division.

Celtic were again without Giorgos Giakoumakis, who was absent for the goalless draw with Hibernian on Sunday through illness, and they missed his penalty-box presence at times.

The Finland international’s effort secured the Light Blues’ first win in five away games, keeping them three points behind the Hoops.

Dogged Saints, locked in a relegation battle with Tayside rivals Dundee, refused to buckle after that disastrous start to ensure a nervous run-in for Rangers manager Giovanni Van Bronckhorst, who opted to keep all his substitutes on the bench.

The Saints are only a point clear of Dundee after the basement boys picked up their first point under Mark McGhee, drawing 0-0 at home with Hibernian.

The Dee were unable to make the most of Hibs having Rocky Bushiri sent off just before the hour mark.

There is a nine-point gap between St Johnstone and 10th place, now occupied by Aberdeen, who were beaten 2-0 at Hearts.

John Souttar and Stephen Kingsley scored either side of the interval before Aberdeen's Lewis Ferguson saw his 70th-minute penalty saved by Craig Gordon.

Ross County moved above the Dons and St Mirren up to eighth with a 1-0 win at Motherwell sealed by an early Joseph Hungbo spot-kick.

Well dropped out of the top six and were replaced by Livingston, who moved up to fourth after coming from behind to triumph 2-1 at home against Dundee United.

The victory came via a late Ryan Edwards own goal after Scott Pitman had cancelled out Liam Smith’s opener. 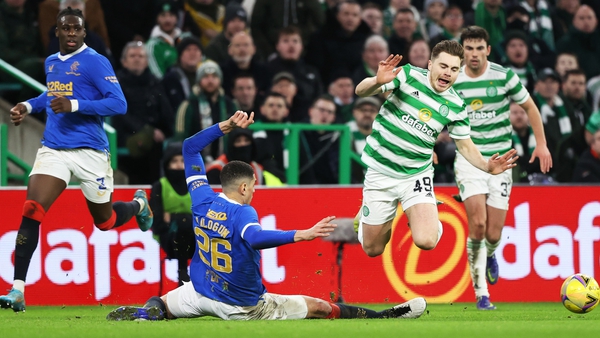 Celtic and Rangers to take rivalry Down Under