Manchester United's bid for a top-four Premier League finish suffered a setback as they were held to a 0-0 draw by relegation-threatened Watford at Old Trafford.

United bossed possession but were left ruing missed chances after a frustrating outing that included Cristiano Ronaldo hitting a post and Bruno Fernandes and Paul Pogba passing up opportunities, plus some good work from Watford goalkeeper Ben Foster and his team-mates.

Second-bottom Watford, who memorably beat United 4-1 in the reverse fixture in November that proved to be Ole Gunnar Solskjaer’s last match in charge of the Red Devils, are three points from safety.

They have picked up five points from six games following Roy Hodgson’s appointment as successor to Claudio Ranieri in January, including their first win since that 4-1 game.

Just prior to kick-off, the teams gathered together to hold up a sign displaying the word 'Peace’, following Russia’s invasion of Ukraine, while a Ukraine flag could be seen in the crowd.

After the contest got under way, Ronaldo was inches away from giving United an early lead when he sent a fifth-minute strike against a post. 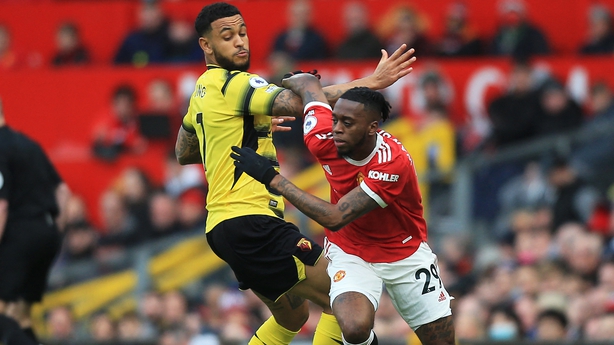 United kept up the pressure, with Fernandes having one shot blocked and another well saved by Foster when he might have passed to Ronaldo, who put the ball in the net shortly afterwards, only to see the flag up for offside.

Fernandes then failed to make the most of further opportunities as he diverted Pogba’s delivery wide on the stretch – beating the ground afterwards in frustration – and headed over after Ronaldo had gone around Foster and crossed to his fellow Portuguese.

A breakthrough continued to prove elusive for the hosts, with a scuffed Fred effort and curling Alex Telles free-kick going wide and no penalty being given despite United fans’ protests when Anthony Elanga went down under the attentions of Craig Cathcart just before the interval.

The second half opened with a chance for Watford as Samir headed wide from a corner, and after Pogba made a misjudgement at the other end, connecting with a lofted forward pass by sending the ball across the face of goal, David De Gea was called into action to save an Emmanuel Dennis shot.

United probed again with another penalty claim, this time involving Ronaldo and Hassane Kamara, being dismissed, Elanga firing wide and Ronaldo seeing a shot blocked on the line.

Foster then did well to claim the ball when it headed goalwards off Ronaldo from a Fernandes cross.

Ronaldo looped a header onto the roof of the net and Fernandes was then thwarted by a fine block by Samir.

Rangnick’s substitutions after the break had included bringing on Jadon Sancho and Marcus Rashford, but it made no difference as the game ended goalless, with the closing stages seeing Sancho strike off-target and Fernandes have a long-range shot gathered by Foster before Ismaila Sarr fired an effort wide of De Gea’s goal with virtually the final kick.