The Republic of Ireland's UEFA Nations League away clash with Ukraine looks certain to be played at a neutral venue after the governing body made significant scheduling changes in the wake of Russia's invasion of the country.

On Thursday UEFA began drawing up contingency plans for the Champions League final - which was due to take place in the Russian city of St Petersburg on 28 May. That game will now be played at Stade de France in Paris.

UEFA also said that the home games of Ukrainian and Russian club and national teams competing in UEFA competitions will be played at neutral venues "until further notice".

Ireland are fixed to face Ukraine in the UEFA Nations League in Lviv on 14 June, but a change of venue now seems highly likely.

On Thursday the FAI said they will welcome Ukraine to the Aviva Stadium for the opening fixture of the group on 4 June.

The association has been in dialogue with the Irish government, UEFA and the Ukraine Association of Football in the aftermath of Russia invading their neighbouring country overnight.

In 2008 the Republic of Ireland played Georgia in Mainz as UEFA insisted their opponent play at a neutral venue due to the then ongoing conflict between Russia and Georgia.

Closer to home, the SSE Airtricity League First Division game between Treaty United and Athlone Town due to be played this evening has been postponed.

The FAI confirmed the decision on Twitter, posting that a new date for the fixture will be arranged owing to "pitch conditions at the Markets Field following severe weather."

The sides had contrasting starts to their season, with Treaty winning big at Ferrycarrig Park, while Athlone were well beaten by Waterford. 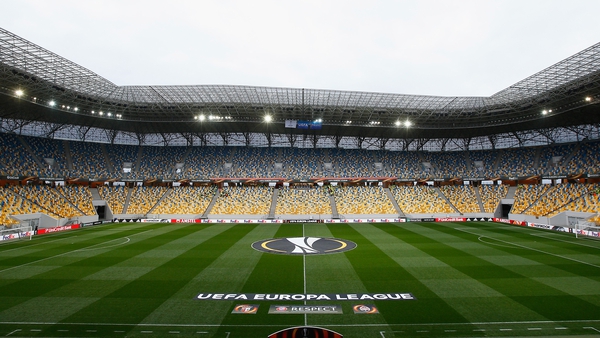 FAI in talks with UEFA over summer fixture in Ukraine