Leeds will issue lifetime bans to any supporters found to have thrown objects onto the pitch during their defeat to Manchester United.

Anthony Elanga was struck on the head by a coin as the away side celebrated re-taking the lead in Sunday's Premier League clash.

The Sweden U21 international recovered to net a late goal and secure a 4-2 win at Elland Road.

Now Leeds have acted and plan to come down hard on any fans shown to have thrown missiles.

"Leeds United are reviewing CCTV footage and we will do everything possible to find those supporters who are throwing objects onto the field of play," a Leeds spokesperson said.

"Any supporter caught throwing objects onto the pitch will be issued a lifetime ban from attending our fixtures."

Speaking after the game, interim Manchester United boss Ralf Rangnick said: "In the end, Anthony looked well and he was happy about scoring. Obviously things like that should not happen."

Meanwhile, West Yorkshire Police confirmed a number of arrests had been made before and during the match.

"Police resources were deployed throughout Leeds city centre and outside the grounds before, during and following the match to ensure the safety of fans travelling to and from the game with minimal inconvenience to the general public.

"There were no reported injuries to any players or fans on either side."

Russ Foster, deputy chief constable, added: "High profile football matches, such as yesterday's fixture can clearly attract some of the greatest concentrations of people and there were a few incidents both before and during the game.

"We also made a handful of arrests for a number of offences including public order, throwing of missiles and breach of banning order.

"The majority of fans on both sides behaved appropriately throughout the match and there was no significant disorder.

"But we hope the early intervention and positive action that we took on the day will help send a very clear message that such incidents of disorder will not be tolerated."

A Football Association investigation is ongoing.

The visitors led 2-0 at half-time courtesy of goals from Harry Maguire and Bruno Fernandes, but Leeds levelled after scoring twice in under 30 seconds through Rodrigo and Raphinha.

Fred and Elanga came off the bench with the former restoring Manchester United's lead.

Elanga was hit on the top of the head during the celebrations but was fine to continue and sealed the victory with his second goal of the season. 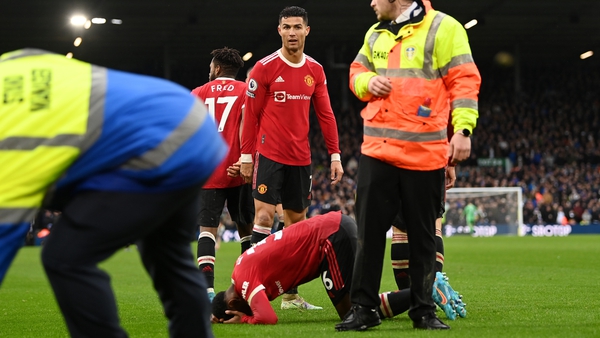 FA to investigate after Elanga struck by object at Elland Road