Giorgos Giakoumakis' dramatic late strike completed his hat-trick and gave Celtic a 3-2 win over Dundee which stretched their lead at the top of the Scottish Premiership to three points.

With new Dens Park boss Mark McGhee watching from the stand as he served the first of a six-game touchline ban, striker Danny Mullen shot the league's bottom side into a shock lead following a 26th-minute corner.

Returning Giakoumakis scored two goals in four minutes before the break only for Dark Blues defender Ryan Sweeney to head in an equaliser on the hour mark.

But in a tension-filled finale, the Greece forward fired in a winner in the 86th minute to capitalise fully on Rangers' 1-1 draw against Dundee United earlier in the day.

McGhee was installed until the end of the season following the departure of James McPake in midweek and the former Celtic striker had to serve a punishment from his last time as Motherwell boss, with assistant Simon Rusk directing operations from the dugout.

The game began pretty much as most people expected. Celtic took control of the ball and the industrious visitors dropped deep to defend.

In the 11th minute, Hoops midfielder Matt O'Riley slipped in skipper Callum McGregor and his cut-back found Giakoumakis but he failed to connect properly with the ball and it sped past the far post. 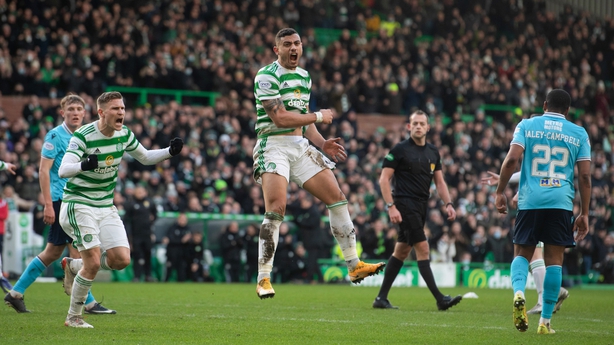 The visitors slowly grew in confidence and when Paul McMullan curled in a corner from the left the Hoops defence stood still as fellow attacker Mullen swept the ball past keeper Joe Hart.

Stunned Celtic stepped up the tempo and they drew level in the 34th minute amid a concerted period of pressure.

Defender Carl Starfelt's volley from Jota's cross was blocked by a Dundee jersey and Giakoumakis' shot on the spin from 14 yards gave Dundee keeper Ian Lawlor no chance.

Four minutes later, the Greek forward was on hand to knocked the ball over the line from close range after former Ireland Under-21 international Lawlor had pushed out a driven cross from Daizen Maeda, who had missed from a couple of yards moments earlier.

The Hoops then appealed for a penalty for a block on Giakoumakis by Vontae Daley-Campbell but referee Gavin Duncan was unmoved.

Maeda failed to connect with a Jota cross from a couple of yards out at the start of the second half, before McGregor fired over the bar from 16 yards.

Jota had the ball in the net with a terrific volley from 12 yards just before the hour-mark but the offside flag was already up.

It seemed only a matter of time before the home side increased their lead, but Dundee stunned Celtic Park for a second time when a whipped-in free-kick from substitute and former Hoops winger Niall McGinn was met by Sweeney who powered a header low past Hart.

Back came Celtic and a Reo Hatate drive slipped past Lawlor's right-hand post while at the other end moments later, Mullen came close with an effort from a Max Anderson cut-back.

Amid increasing nerves, Celtic threw everything at Dundee and eventually got the winner in the 86th minute when Giakoumakis flashed a cross from Anthony Ralston past Lawlor from close range and this time the visitors had no answer. 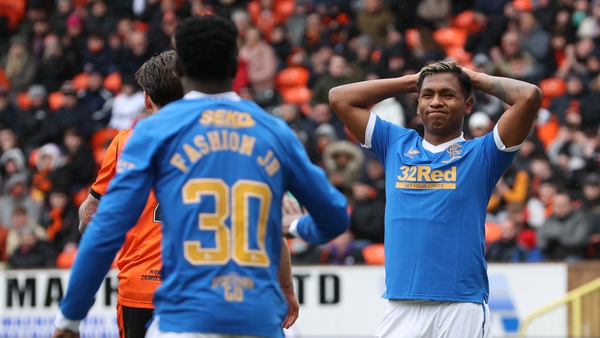 Rangers drop points after European heroics in boost to Celtic