Guro Reiten set up a mouth-watering top-of-the-table showdown with Arsenal as Chelsea closed the gap to the Women's Super League leaders to just two points with victory over Manchester City.

Reiten's 14th-minute glancing header was enough to secure a 1-0 home win on Sunday afternoon to leave Emma Hayes' second-placed Blues within touching distance of the Gunners, who are due at Kingsmeadow on Friday evening, with a game in hand.

Chelsea, who were indebted to keeper Ann-Katrin Berger for a fine 40th-minute save from Jess Park, might have extended their lead during a strong start to the second half, but found themselves hanging on at the death with England defender Millie Bright clearing Lauren Hemp's goalbound strike off the line.

Republic of Ireland defender Louise Quinn scored a late goal for Birmingham City but they are in danger of being cast adrift at the foot of the table after Leicester came out on top in the battle of the bottom two.

The Blues were reduced to 10 women with just 26 minutes gone when keeper Emily Ramsey was sent off after bringing down striker Jess Sigsworth, who dispatched the resulting penalty past substitute Lucy Jones.

Jemma Purfield doubled the visitors' lead direct from a 37th-minute corner and although Quinn reduced the deficit five minutes from time, there was no way back.

Kyah Simon scored twice as Tottenham romped to a 4-0 win over Brighton to close the gap on third-placed Manchester United to a single point.

The Australian gave her side a 12th-minute lead and added to her personal tally after second-half goals from Ashleigh Neville and Shelina Zadorsky, with Spurs striking three times inside six minutes to cement victory.

Tia Primmer left Everton looking anxiously over their shoulder after Reading came from behind to win 2-1 at Walton Hall Park. 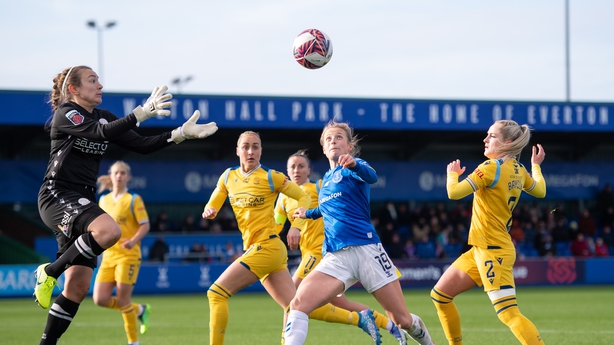 The Toffees looked to be on their way when Anna Anvegard fired them into a fifth-minute lead, but they were unable to build upon their early advantage, with Izzy Christiansen seeing her second-half penalty saved by Ireland goalkeeper Grace Moloney.

They were made to pay when Natasha Dowie levelled before Primmer snatched a fifth successive league victory with two minutes remaining.

Abbey-Leigh Stringer had put the visitors ahead with just 12 minutes gone and although Alisha Lehmann levelled from the penalty spot before the break after Ramona Petzelberger had been fouled by Kate Longhurst, Svitkova clinched the points seven minutes after the restart.