Nottingham Forest ran riot to dump holders Leicester out of the FA Cup.

Philip Zinckernagel and Brennan Johnson scored twice in barely a minute before Joe Worrall made it 3-0.

Kelechi Iheanacho pounced on Brice Samba's mistake but Djed Spence added a fourth in the second half to wrap up a dominant win.

Under Steve Cooper Forest have lost just four of 23 games, winning 13, but against their local rivals this will be the most satisfying.

A swashbuckling, intense and stylish display continued their upward trajectory with the former Swansea boss, who has taken them from relegation candidates to promotion hopefuls in just five months.

They can add FA Cup specialists to that list now too having already dumped out Arsenal. A home fifth-round tie with Huddersfield will have the locals dreaming of a first quarter-final since 1996.

Meanwhile Leicester's season continues to unravel. In the space of 11 games the Foxes have gone out of the Europa League, the Carabao Cup, the FA Cup and seen the gap to the top six grow from two points to 10.

Success in the Europa Conference League appears to be their best hope of European football next term but Brendan Rodgers has growing problems.

Not least in defence, which folded again after Leicester appeared to have settled at the City Ground.

Iheanacho and Ademola Lookman threatened early yet it was a false dawn as Forest blew them away in a devastating nine-minute spell.

Keinan Davis had already crashed a volley off the bar before Forest snatched two goals in just 87 seconds.

It was Johnson who was crucial to underline his importance to the hosts, who resisted January interest from Brentford.

First, after 23 minutes, his deep cross found Davis to nod down for the unmarked Zinckernagel to steal in between Daniel Amartey and Wilfred Ndidi and fire past Danny Ward.

Leicester then collapsed seconds later when, from the restart, Amartey's awful back-pass found Johnson and he stroked through Ward's legs to make it 2-0.

The holders had been obliterated and worse was to follow when they fell further behind after 32 minutes.

But as the hosts celebrated a fan entered the field from the away section before starting to throw punches at the Forest players before being hauled away.

Nottinghamshire Police later said they had arrested a man after the incident, which happened during the first half of the fourth-round contest.

Forest swarmed over Leicester and Spence was denied by Ward, yet the hosts gifted the Foxes a lifeline they barely deserved five minutes before the break.

James Maddison's cute pass found Iheanacho on the left with Samba inexplicably rushing out of his goal. The striker pushed the ball through the goalkeeper's legs and finished well from an angle to give the visitors hope.

It completed a breathless half and the next goal was crucial. Patson Daka replaced Barnes at the break and he teed up Maddison to curl just wide eight minutes after the restart before firing over himself.

There was to be no heroic comeback, though, and Spence added a fourth just after the hour when he swapped passes with Zinckernagel to find the bottom corner.

Leicester also issued a statement about the pitch invasion incident: "The club is appalled by such behaviour and offers its apologies to Nottingham Forest and its players whose safety was compromised.

"We applaud the swift action taken by City Ground stewards in apprehending the individual involved, who will be subject to a lifetime ban from all Leicester City fixtures at home and away.

"We will offer every support to the relevant authorities in pursuing further appropriate action." 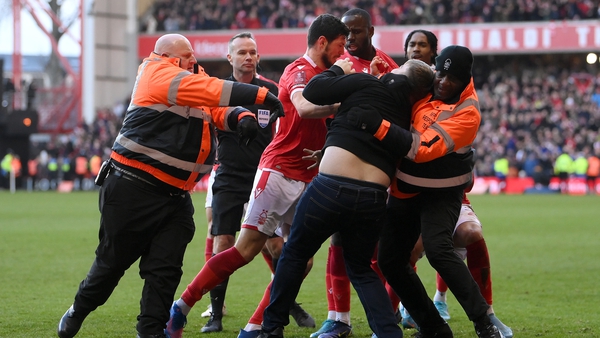