Republic of Ireland striker Adam Idah helped Norwich to an impressive FA Cup victory at Wolves but there was disappointment for Jeff Hendrick and Jamie McGrath as their debuts with their new clubs coincided with exits from the competition.

Hendrick joined QPR, who had Jimmy Dunne in their starting side, on loan from Newcastle just before the end of the January transfer market and he was introduced at half time as the London side tried to turn things around against Peterborough. They were unable to do so with Ricky Jade Jones sealing a 2-0 win after Joe Ward had put the Posh ahead in the first half.

McGrath was also on the move last month as he joined Wigan from Scottish side St Mirren, but his first game with his new side saw them fall to a 2-0 loss to Stoke City.

The 2011 runners-up opened the scoring inside 14 minutes when debutant Josh Maja - a midweek loan signing from Bordeaux - converted from close range after a slip by Latics defender Jason Kerr.

Backed by over 4,000 travelling fans, the visitors gradually grew into the fixture and threatened to find a leveller through Max Power as they looked to preserve their 20-match unbeaten run.

However, substitute Jacob Brown dented their hopes of a cup upset when he doubled the Potters' advantage less than two minutes after entering the fray.

Gwion Edwards was shown a second yellow late on for Wigan - winners of the competition in 2013 - as Stoke progressed to the fifth round for the first time since 2015.

There was better news for Idah though as Norwich claimed a 1-0 win over Wolves at Molineux.

Kenny McLean's header at the end of the first half proved decisive as Norwich reached the fifth round for just the second time in the last decade.

Shane Long and Southampton are also in the next round as they eventually fended off Coventry at St Mary's.

They needed a Stuart Armstrong wonder-strike and an extra-time goal from Kyle Walker-Peters to win 2-1.

The Championship side led through a fine first-half goal from Viktor Gyokeres and had chances to be even further ahead.

A mix-and-match Saints side which featured 17-year-old debutant Thierry Small at left-back and Long and Theo Walcott - with a combined age of 67 - in attack, were second best throughout the first half.

Premier League leaders Manchester City came from behind to sweep Championship pace-setters Fulham aside 4-1 at the Etihad Stadium.

City were stunned as Fabio Carvalho opened the scoring after just four minutes but soon levelled through Ilkay Gundogan.

John Stones then headed the hosts ahead as the frantic start continued and Riyad Mahrez put the result beyond doubt with two efforts - the first from the penalty spot - early in the second half. 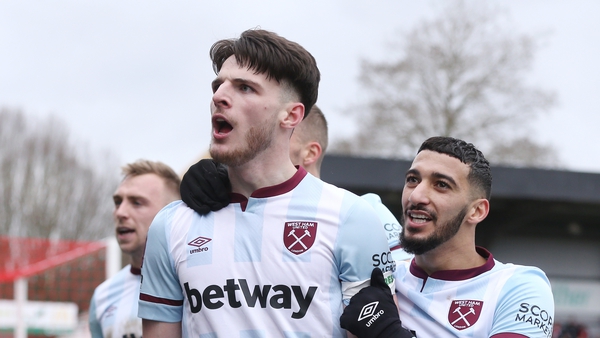