Liverpool manager Jurgen Klopp believes there will be a longer-term benefit to team-mates Mohamed Salah and Sadio Mane's Africa Cup of Nations experience.

The pair go head-to-head in the tournament final in Cameroon just hours after their colleagues host Cardiff in the FA Cup fourth round at Anfield.

Both have made pivotal contributions in helping their nations get to the showpiece with Mane scoring three goals and providing two assists, with Salah netting twice with one assist.

However, Klopp thinks the all-round roles they have played for their respective countries in terms of leadership and shouldering the burden of pressure is just as important.

"I watched a lot of games - and it was really obvious Naby (Keita) was the absolute leader in the Guinea team, the same for Sadio in the Senegal team and of course Mo with Egypt," he said.

"When the coach was not there any more (in Thursday's semi-final) because he got a red card, before the penalty shoot-out you saw Mo talking, speaking and all these kind of things with the whole group.

"All the experience these boys in these situations get help us of course. Short-term I'm not sure, long-term definitely.

"It's very important that you get through these kind of things.

"It's difficult obviously to get that far in a tournament, the pressure - they are the superstars so the pressure they had on their shoulders was massive.

"I'm really proud of the way they dealt with it. Now two of them are in the final and we will watch it definitely."

Despite their involvement right until the end of the tournament, Klopp expects to have both back in time to face Leicester when their Premier League campaign resumes on Thursday.

"I think they will be available but we will see," he added.

"The one who wins will probably fly back to their home country for a celebration. I think Tuesday or Wednesday latest the winner will be back, the other slightly earlier. Then I have to talk to them.

"One thing is they have rhythm as they have played quite a few games."

Having already reached the final of one domestic cup competition - Liverpool face Chelsea at Wembley on 27 February in the Carabao Cup - but Klopp wants to double up if possible.

Klopp has reached the last 16 of the competition only once in his six previous seasons.

Asked about how big the desire was to reach a second cup final this term, Klopp said: "Massive. I cannot say more.

"We are not the most successful FA Cup team as long as I'm here. We are quite ambitious." 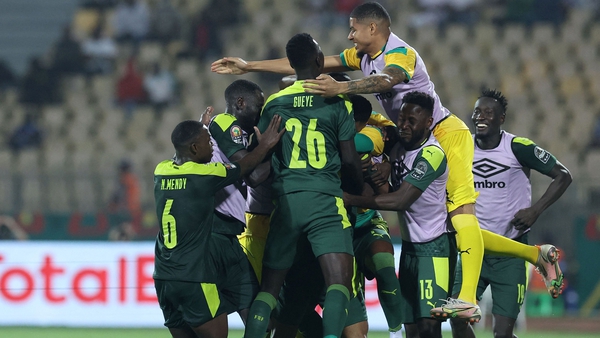 AFCON: Sadio Mane on target as Senegal advance to final