Frank Lampard has been appointed Everton manager after signing a two-a-half-year contract at Goodison Park.

The former Chelsea midfielder and manager underwent a final interview in London on Friday, along with other contenders Vitor Pereira and previous caretaker boss Duncan Ferguson.

Lampard will keep Ferguson, who has been part of the first-team coaching set-up under the last six permanent managers and also been caretaker boss, while former Republic of Ireland player Alan Kelly will remain as goalkeeping coach.

Owner Farhad Moshiri, chairman Bill Kenwright and other board members were present and Lampard was officially appointed as a successor for Rafael Benitez on Monday.

Lampard said: "It is a huge honour for me to represent and manage a club the size and tradition of Everton Football Club. I'm very hungry to get started.

"After speaking to the owner, Chairman and the Board, I very much felt their passion and ambition. I hope they felt my ambition and how hard I want to work to bring it together.

"You can feel the passion Everton fans have for their club. That will be hugely important. As a team - the competitive level that the Premier League brings and the position we are in the table - we certainly need that. It's a two-way thing.

"I think Everton is a unique club in that you can really understand what the fans want to see. The first thing they want is fight and desire and that must always be our baseline.

"My first message to the players will be that we have to do this together. We'll try to do our job and I know the fans will be there backing us."

Although it is only a fortnight since Benitez was sacked, the club's search has felt like a drawn-out process due to the soap opera which has accompanied it.

Everton first tried to bring back former manager Roberto Martinez on a job-share arrangement only for Belgium, in a World Cup year, to reject that possibility.

Lampard and Pereira were interviewed early on, while the club also requested to speak to former Toffees striker Wayne Rooney but the current Derby boss turned it down.

Fan protests about the running of the club both inside and outside Goodison Park added to the feeling of chaos, which were not helped by Pereira's bizarre 20-minute live television interview last Wednesday which appeared to lose him the position as front-runner.

Everton majority shareholder, Farhad Moshiri, said: "I am really delighted that Frank has joined us. He is an impressive young man and off the pitch. He has played at the very highest level of the game and has football in his blood.

"He impressed us all greatly during the thorough interview process and we're all ready to give him all of our support as he looks to give the team an immediate boost."

Lampard's first task will be to steady a sinking ship and pull Everton away from the relegation zone.

Ten defeats in their last 13 matches has left the club just four points above the bottom three and, having lost central midfielders Abdoulaye Doucoure and Fabian Delph for at least a month, the need to get in reinforcements before Monday's deadline is imperative.

However, Everton's delay in settling on their next permanent manager - coupled with the lack of a director of football and head of recruitment - has made that more difficult.

This January the club spent £30million on full-backs Vitalii Mykolenko and Nathan Patterson - Benitez signings who both failed to feature in Ferguson's squad for his one match in charge - with defender Lucas Digne joining Aston Villa but they still require further strengthening. 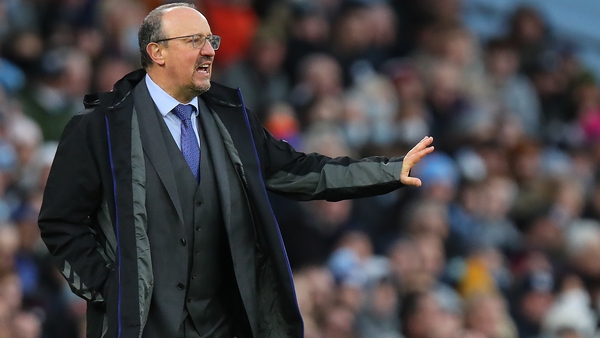